A Reiki Master at Camp

Hello everyone! My name is Brenda and I am one of the newest Camp Counselors to join the Camp Canine team. In addition to my wonderful job as a Counselor, I am also a certified Reiki Master and Practitioner for both animals and people, though the initial reason I began studying Reiki is to help animals.

A little about my background: I spent most of my working life as an Administrative/Executive Assistant at various companies within Corporate America. I’ve always loved animals, but never had the opportunity to really consider what I could do for a living that involved animals. Growing up, I always had cats. While I liked dogs, I never owned one until much later in life: a Maltese named Norman who changed everything for me. 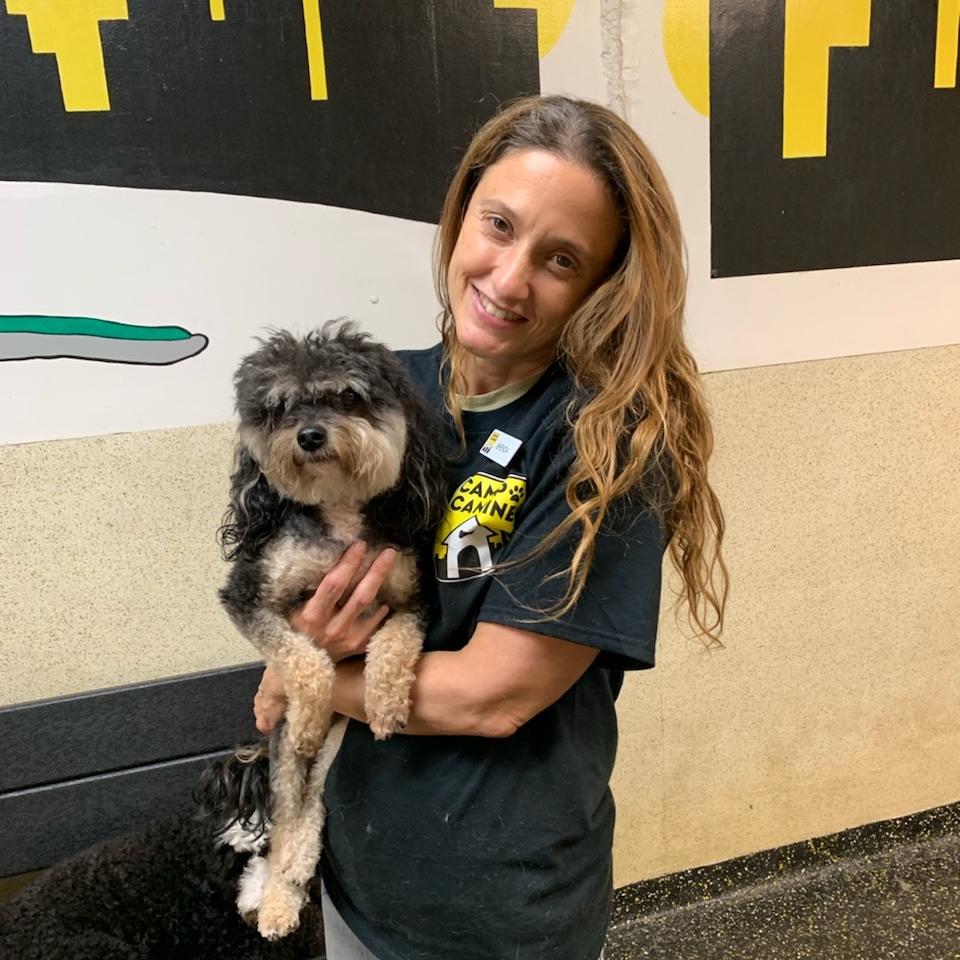 Roughly ten years ago my husband and I decided we wanted children. Long story short, after several years of fertility treatments and research into adoption, we realized this path wasn’t meant for us. Enter Norman! I immediately fell in love. Shortly afterward, I began fostering for a local rescue, my first foster being a four-month-old American Eskimo named Koda. The founder of this particular rescue also owned a dog grooming salon in Brooklyn and needed a Saturday bather. Despite having no experience bathing dogs, she decided to give me a chance and within a few months I was working there full time. This is when my interest in Reiki began.

Actually, I had an interest in Reiki for some time, but I started to wonder if it could be applied to animals as well as humans. For those unfamiliar with Reiki: simply put, Reiki is a natural, completely non-invasive process of healing that originated in Japan centuries ago. It’s also known as energy healing. While it is by no means a replacement for traditional medical treatment, it does aid in healing, pain management, tissue regeneration, and stress. Reiki assists with loosening blocked energy caused by stress, promoting relaxation. This process is done by simply laying your hands on or placing them a few inches away from the individual or animal. There is some spirituality involved with Reiki but, for the most part, physics is primarily involved. (Many people feel the Reiki is associated with religion/religious beliefs, but this is not true. Meditation and mindfulness play a huge role in Reiki practice; your religious beliefs do not.) One of the best aspects about Reiki is that everyone has the ability to learn and practice it. Every single one of us has healing abilities!

So, getting back to the subject of furbabies … it’s no secret that grooming salons can make pups nervous. Despite the groomers doing all that they can to ease the dogs into the process, sometimes there are dogs with nerves that cannot be calmed. Through Udemy.com, I found a class specifically for animal Reiki. After taking this class and getting attuned (that’s a subject for another time), I began putting my gift to use on the dogs I came in contact with at work. My coworkers and I began noticing the difference immediately. Clearing my mind of any thoughts and concerns, channeling my energy, and gently placing my hands on the dog’s shoulder area or backend made a world of difference. Calmly repeating “you’re safe” helped as well. Soon, they are less fidgety and nervous, and seem to trust me and their groomers more. 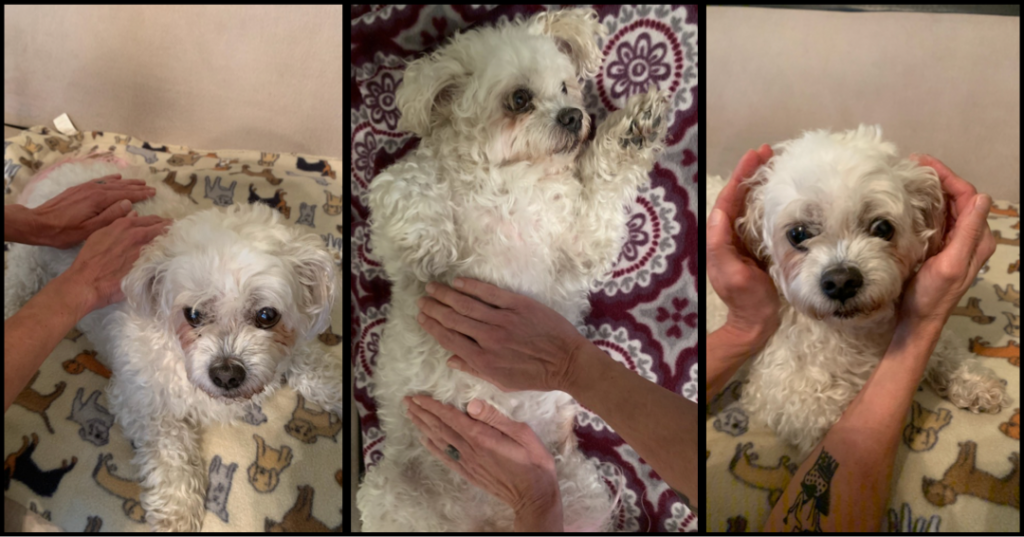 Animals are extremely receptive to any type of energy healing as they differ from humans in that they are always living in the moment. They don’t overthink things or worry about the future the way we do. They also have an uncanny ability to sense your energy. One groomer had a dog on her table that she had known for many years and he was being fussy. Despite not being totally convinced in this healing modality, she asked if I would perform Reiki on him, purposely not telling me in advance what his issue was. As I approached him, I mentally sent him a message asking if he was okay with me doing a session (even though animals are very receptive, it is still advised that you ask their permission unless they come to you). In response to my asking him he made a little sound which I sensed was a yes and to confirm this, he held out his paw for me. Taking his paw, I felt heat emanating from it. As it turned out, he had injured his paw recently and the stress from getting groomed was irritating it. He soon calmed down and the groomer was able to do her job without any issues.

In another instance, I was drying a Lhasa Apso who had just lost his brother a couple of weeks prior. In the past he and his brother were a handful for everyone involved. On this day, I purposely took my time with him knowing he would be in mourning. While on the drying table, he set his head against my chest and kept it there. I turned off the dryer that I was using and placed both my hands on his shoulders. Not only did my hands and chest feel hot, I immediately felt as if I was going to cry on his behalf. At times you may feel their emotions yourself. 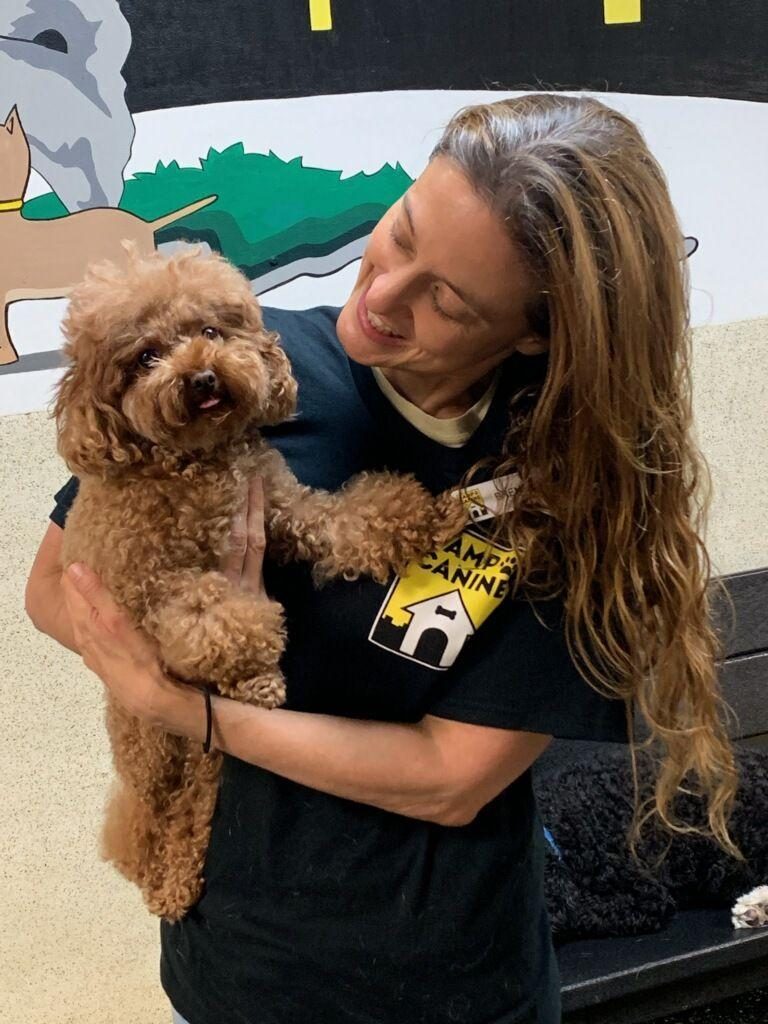 In addition to animal Reiki, I’ve also studied animal communication, which is a more complex skill. This also involves meditation and an awareness of your telepathic abilities. As with energy healing, telepathy is also an ability we all possess, it’s simply a matter of tapping into that gift and animal communication helps you do this. (Animal communication is also skill that can be better understood on Udemy.com) Some people can actually sense what an animal is attempting to communicate with them by actually hearing those messages, while others get a feeling (which is the case with me.) At times, I may get visuals. One example of this is when I practiced during my class. The instructor had a Facebook page where the students could practice on one another’s pets; they would post pictures of their pets and we would try to connect with them. In one case, as I connected with a fellow student’s cat, I got a visual of another cat at a window across the street, as well as the moon. As it turned out the owner’s cat was friendly with a neighbors cat across the street, and the owner regularly took the cat outside with her so that they could look at the moon together.

While I am still in the process of learning animal communication and feeling more comfortable with it, I do offer Reiki services for all types of pets and people. In addition, I’m also certified to teach Reiki; it is, by far, a skill I believe everyone should learn. If anyone is ever interested in a session or learning, you can reach me at Camp Canine, or email me at thornlowb71@yahoo.com!