A Day in the Life of a Camp Canine Counselor

Last Tuesday morning, I went ‘under cover’ to bring you a sneak peak into the life of a Camp Canine counselor. I shadowed our lovely counselor Meredith, who is famous at Camp for her upbeat personality, fierce love of the dogs, and her excellent signing voice (the dogs love being serenaded by her!) She’s worked at Camp Canine for two years and, even though I only shadowed her for four hours, her love for the dogs was evident.

“The morning shift begins with love, and then walks.” She told me. Counselors arrive at 6:30am and immediately begin walking the dogs who had spent the night. Then, some of the counselors are assigned to go right into feeding breakfasts, and others stay in the room to greet the day’s arrivals and store away their leashes and coats for safe keeping. 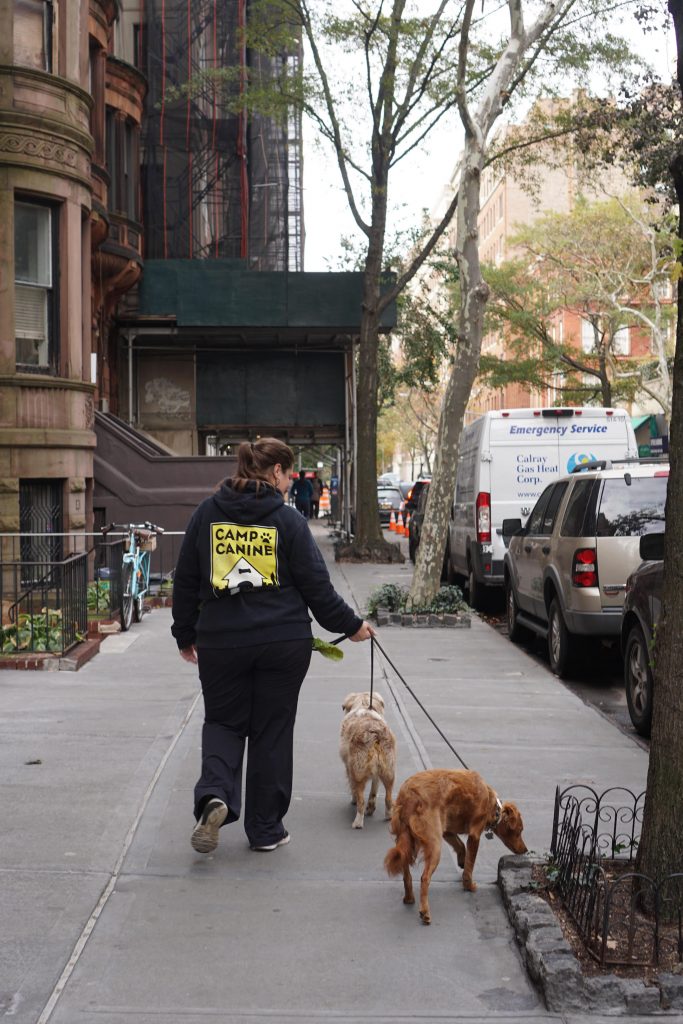 “I love feeding,” she said with so much enthusiasm. “Some dogs prefer to eat with certain people, so it’s always an honor when they eat with you.”

After breakfast, its “hangout time.” This is generally when Camp Canine has the most dogs – a lot of the boarding pups haven’t yet gone home, and almost all of the daycare dogs have arrived. The pups are excited at this time in the morning, and they’ll run and jump and play. Sometimes – and I’m glad I got to witness this – one dog will break out into a howl, and then the entire room will follow suit! Meredith calls this “Howl Hour” (even though it only lasts for a few minutes.) She explained that it helps get some pent-up energy out of the pups as they start their day. My favorite part of “Howl Hour” was seeing Meredith sitting in the middle of the room with a Schnauzer on her lap, howling right along with the chorus. 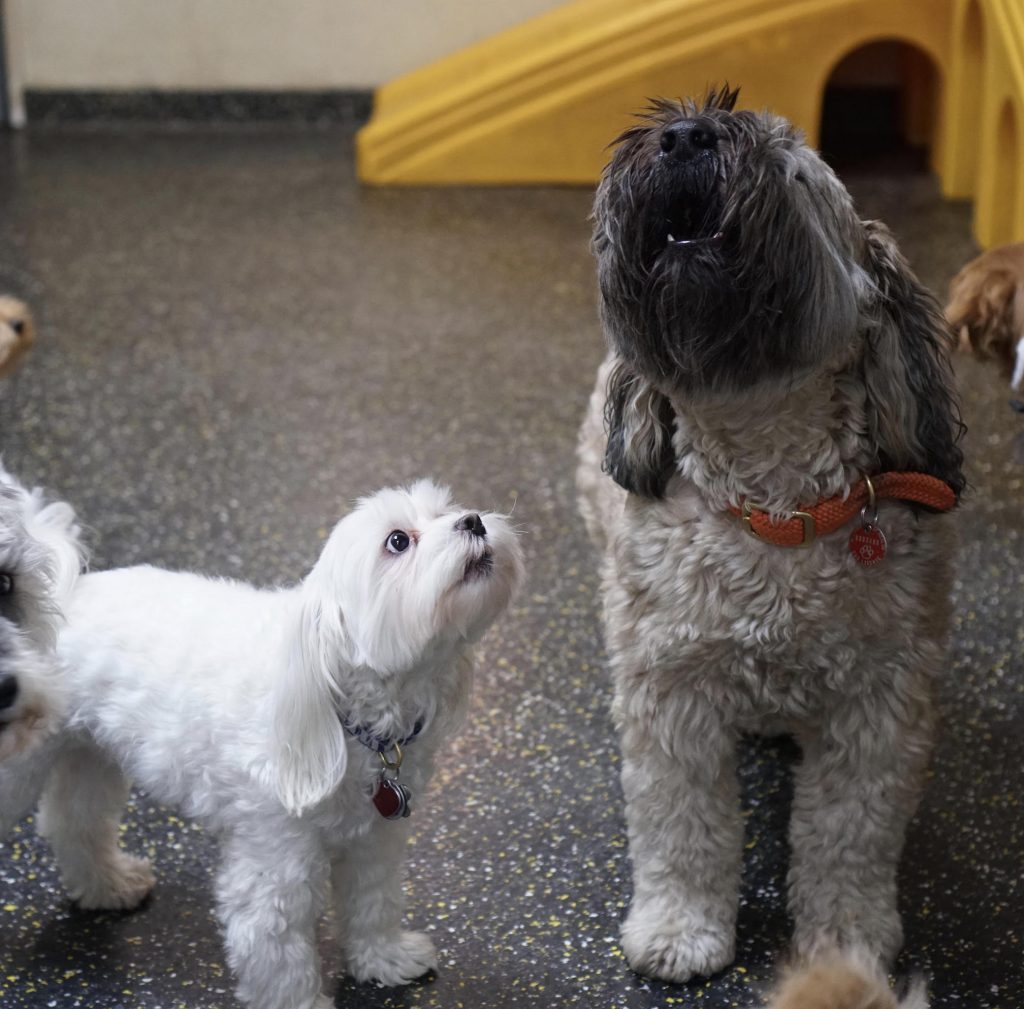 There’s lots of cleaning during hangout time. When Meredith wasn’t holding a dog, she was holding a mop. 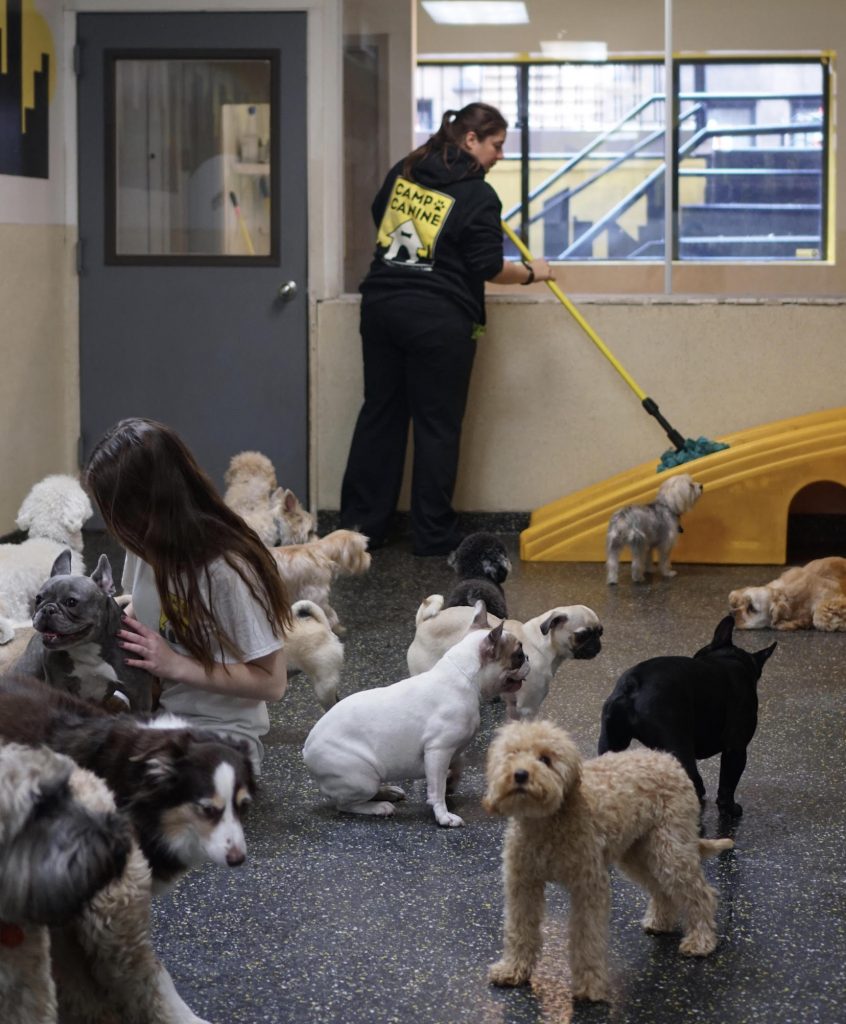 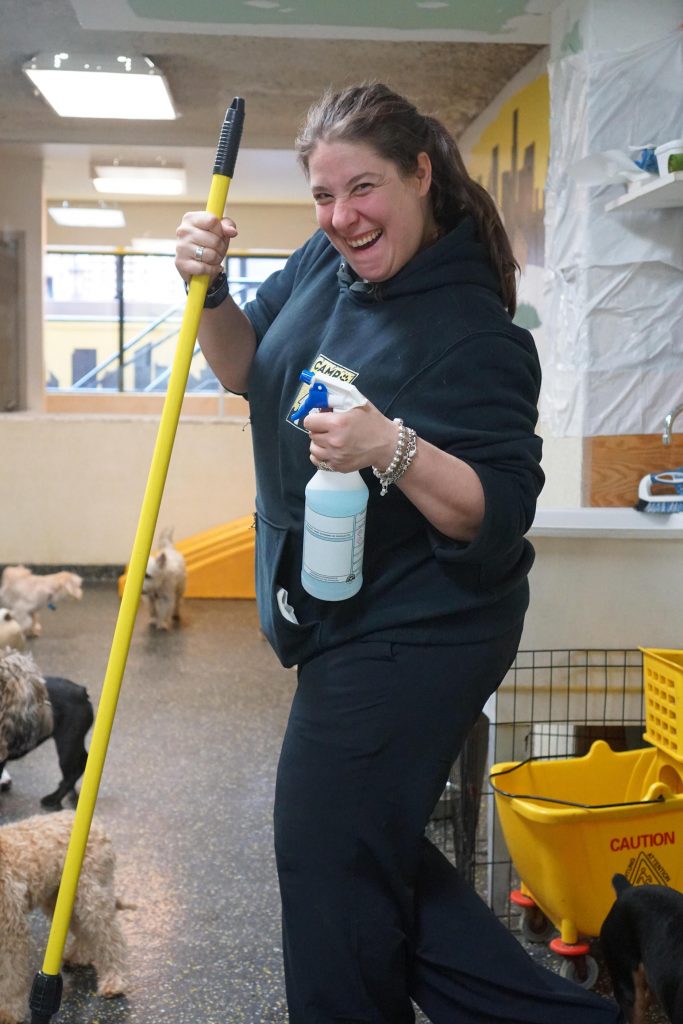 Then, the campers and counselors do it all again! Feeding, walks, and hangout time. Lunchtime rolls around, and the counselors get to work serving lunches in individual bunks so that they could eat in peace. This time, Meredith kept track of who had already eaten their lunch via a large list on the wall. 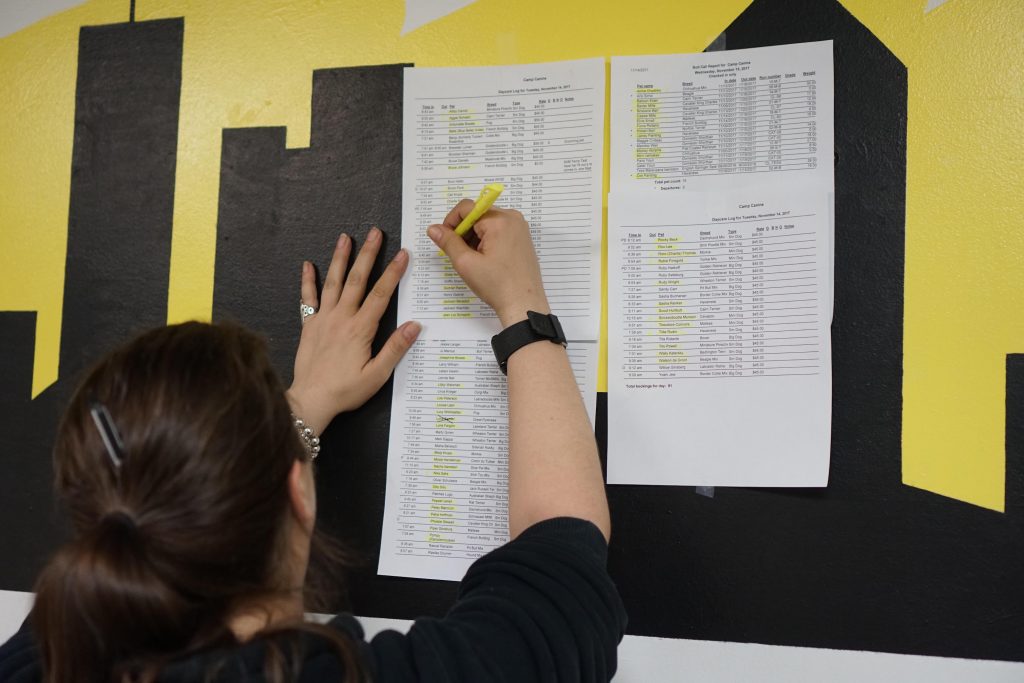 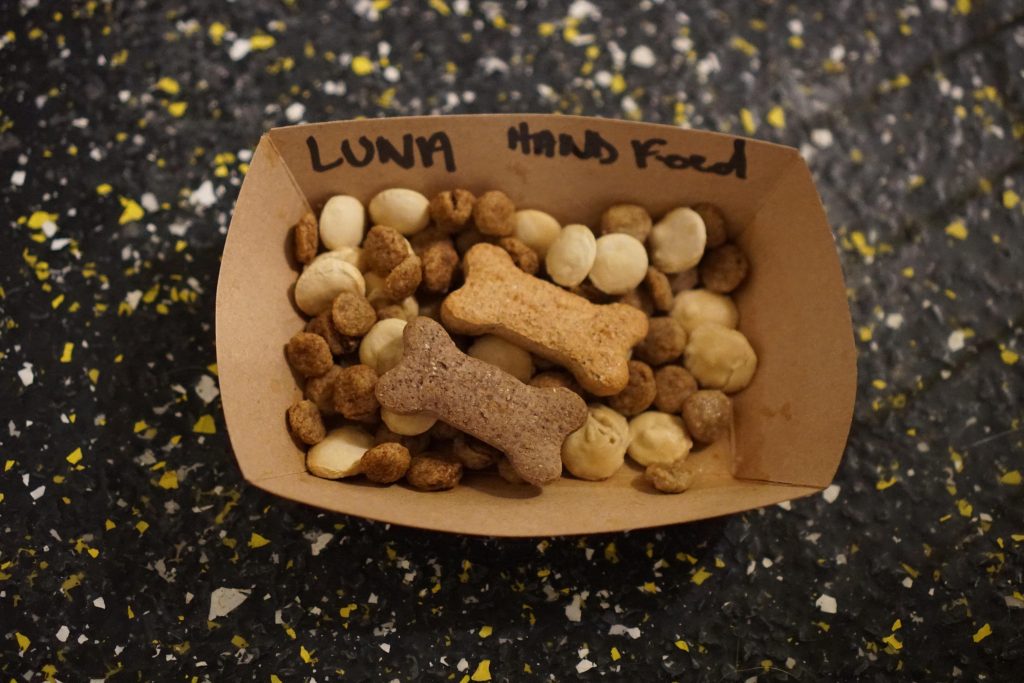 After lunch, it was time for walks again. Meredith strapped a belt around her waist that she hooked the leashes onto for extra security. All counselors are required to use this walking belt, while working together to walk all of the dogs in the building! In total, Meredith walked 17 dogs, and I followed along behind her snapping pictures. 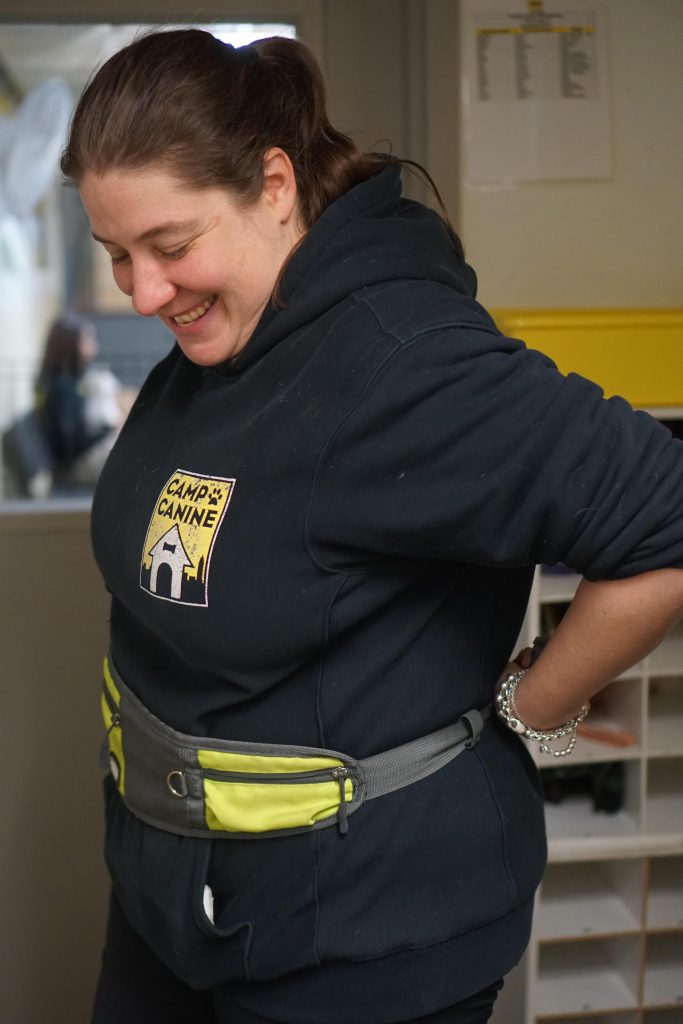 Each counselor takes no more than two dogs at a time, and they give the names of the dogs to the receptionist so that she can keep track and confirm that all of the dogs get walked. “We like to combine the names,” Meredith said. “Patrenzo!” she said to the receptionist as she walked Petra and Enzo out the door. Dori and Roo became ‘Doroo’ Libby and Mickey were ‘Libickey.’ It was adorable and quirky, and all of the counselors joined in.

During one of the walks, Meredith came out with just one dog. I asked her why Rocky was being walked by himself, and she explained that they walk dogs prone to guarding or nervousness by themselves. “You have to have a good memory to work here,” I said and she paused while she thought about it. “Yeah, I guess so! You have to remember if any dogs have food allergies, who gets walked on their own harnesses rather than our leashes – there’s a lot of moving parts. Let alone just learning all of the names!” 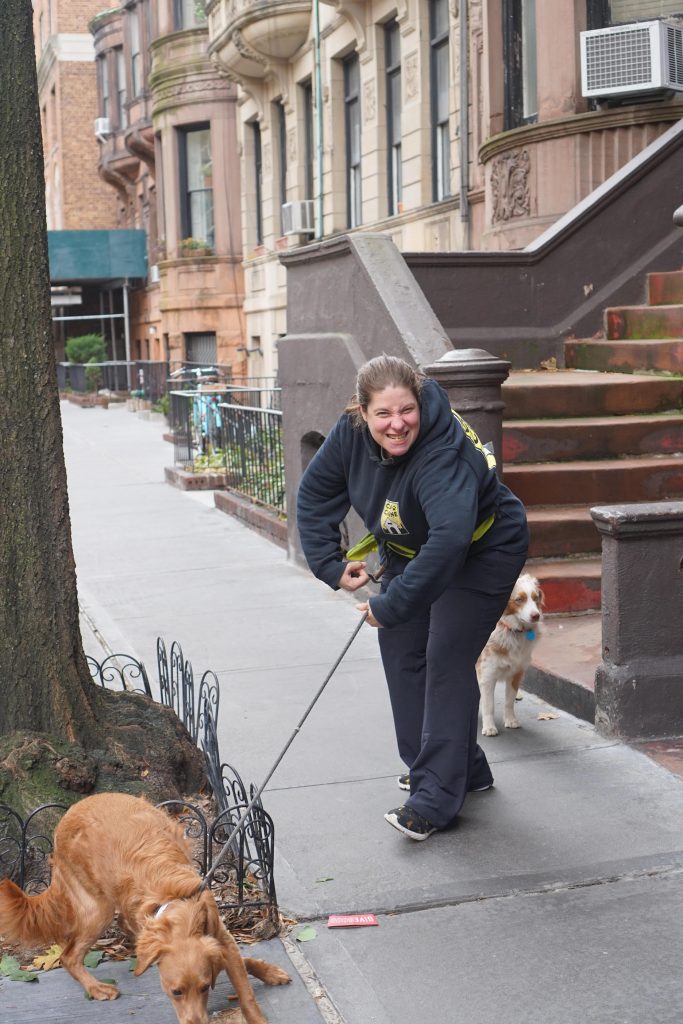 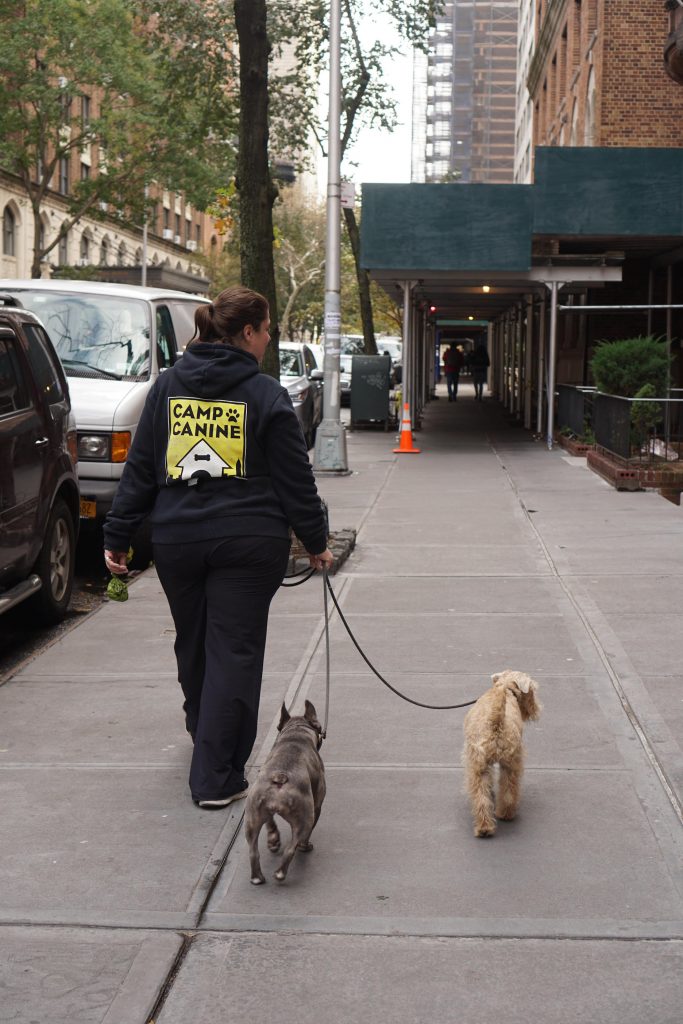 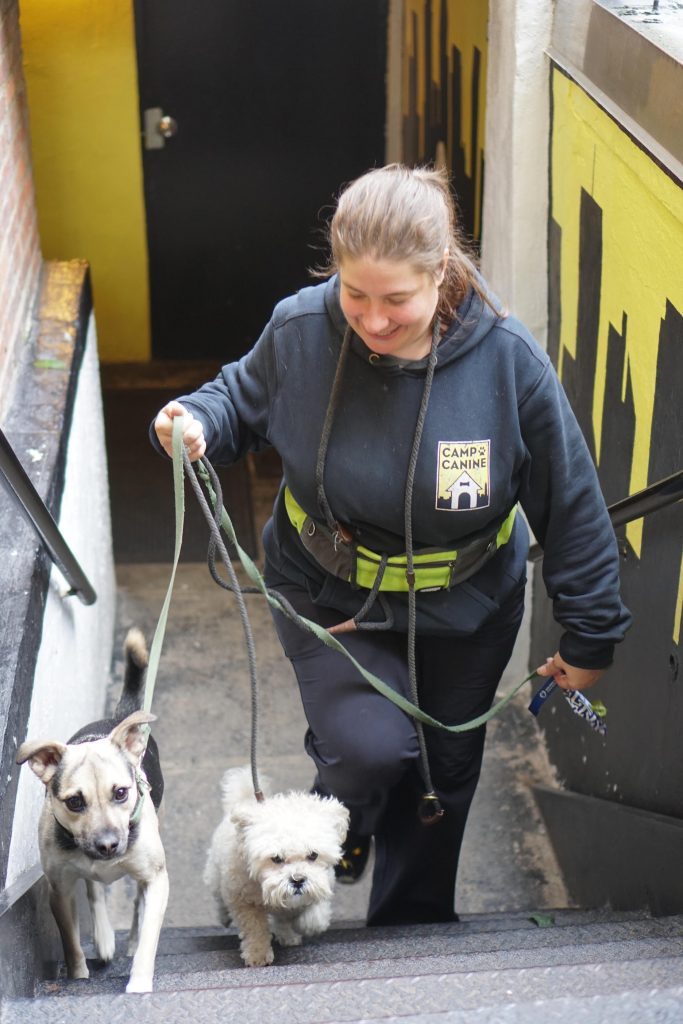 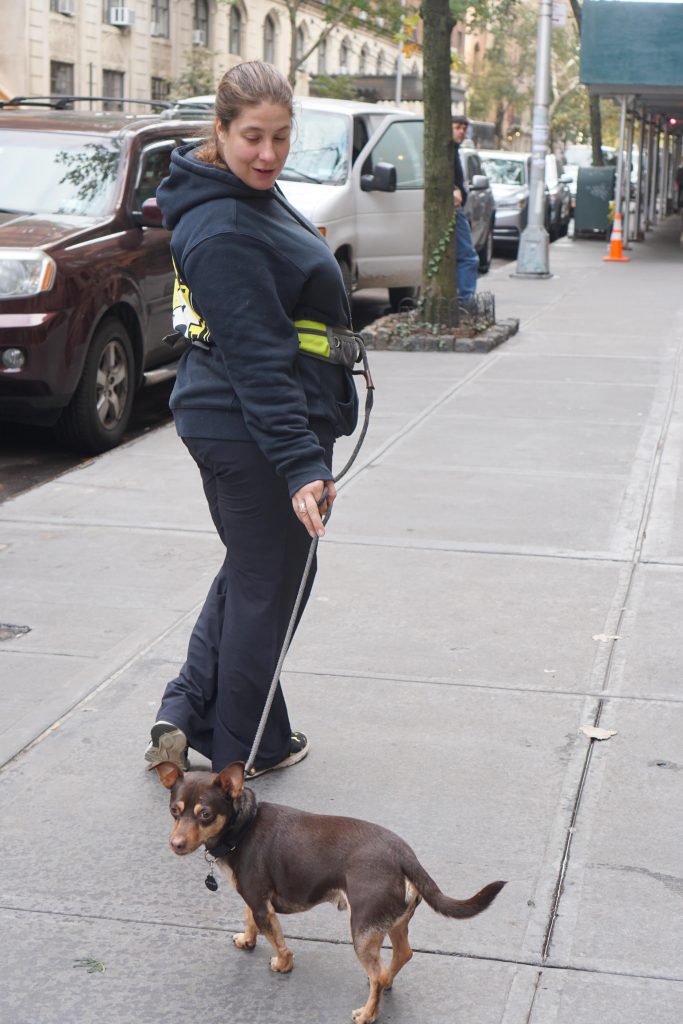 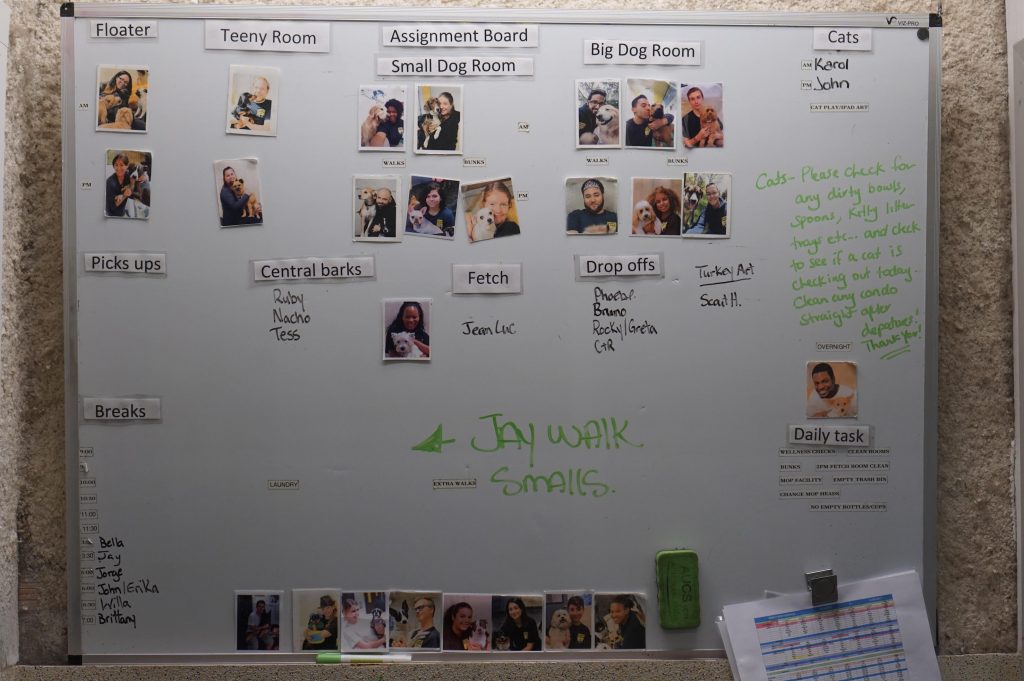 “Do you have an activity you like to do most?” I asked Meredith. “No, I love them all!” She said.

Scout was the lucky pup making a Thanksgiving turkey to take home to his parents that day. Meredith coaxed him into the room and he warmed up to the idea of putting his paw on an inkpad instantly. The result? Beautiful art! 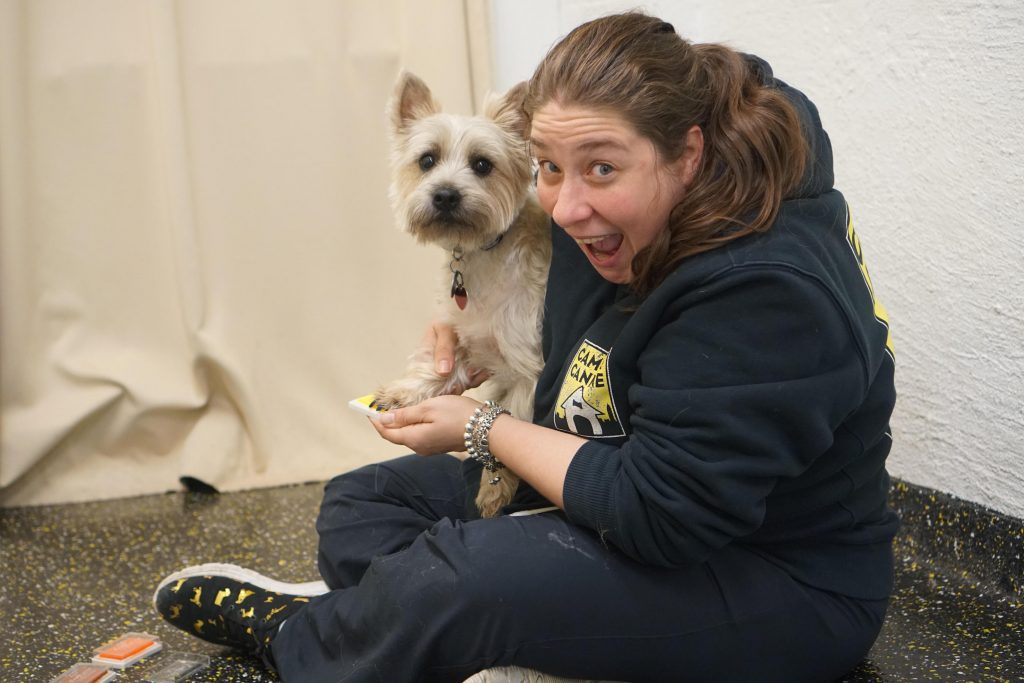 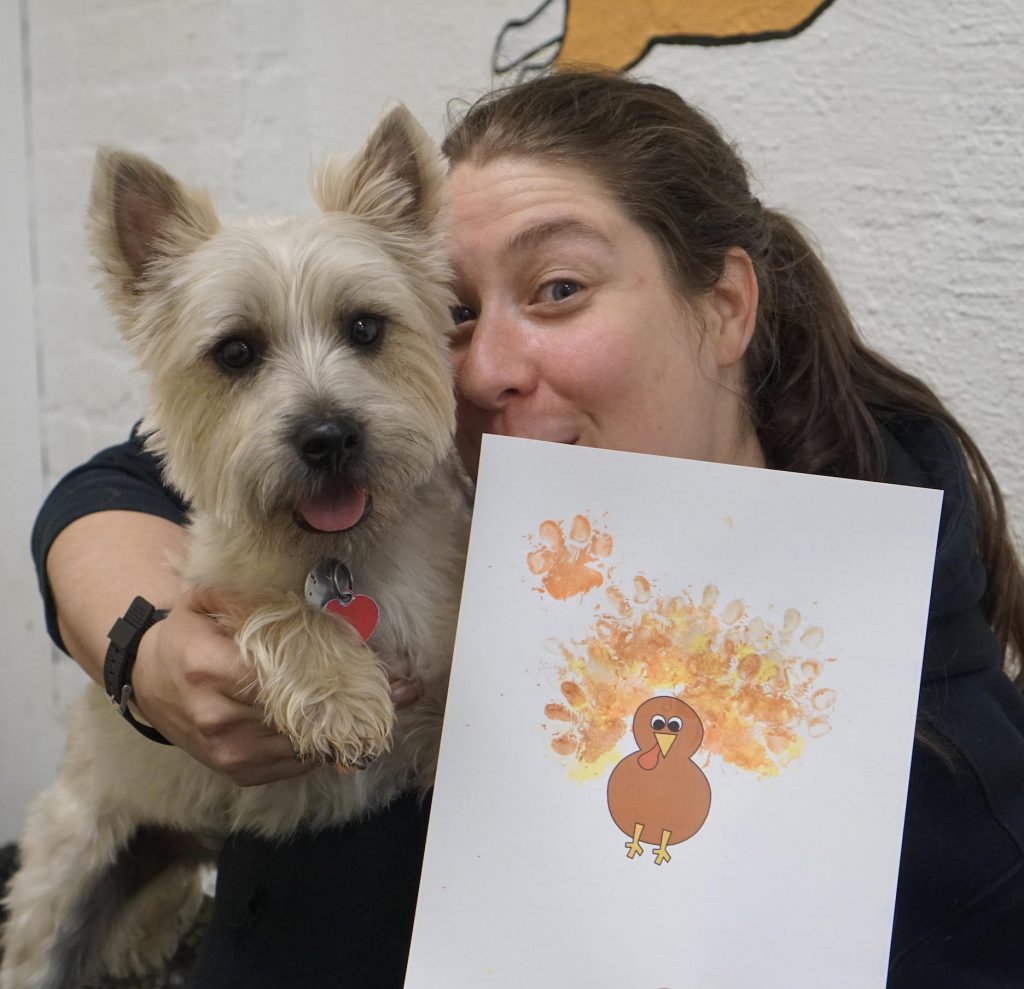 By the time this activity was done, Meredith only had about 40 minutes left in her day. After a brief meeting with the boss regarding holiday scheduling, she was back in the room for more cuddles and love before the end of her shift. 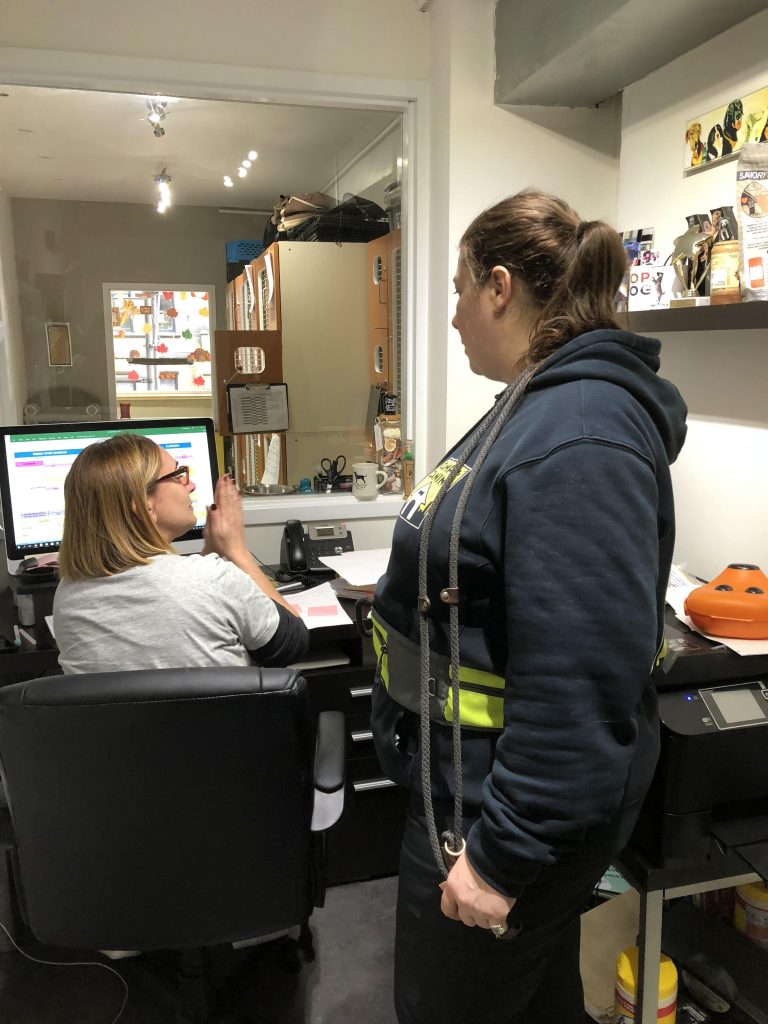 At the end of the day, I asked her if there was anything else she’d like me to include in the article about her and she said, with a giant smile, “just make sure they know how much I love my job!” 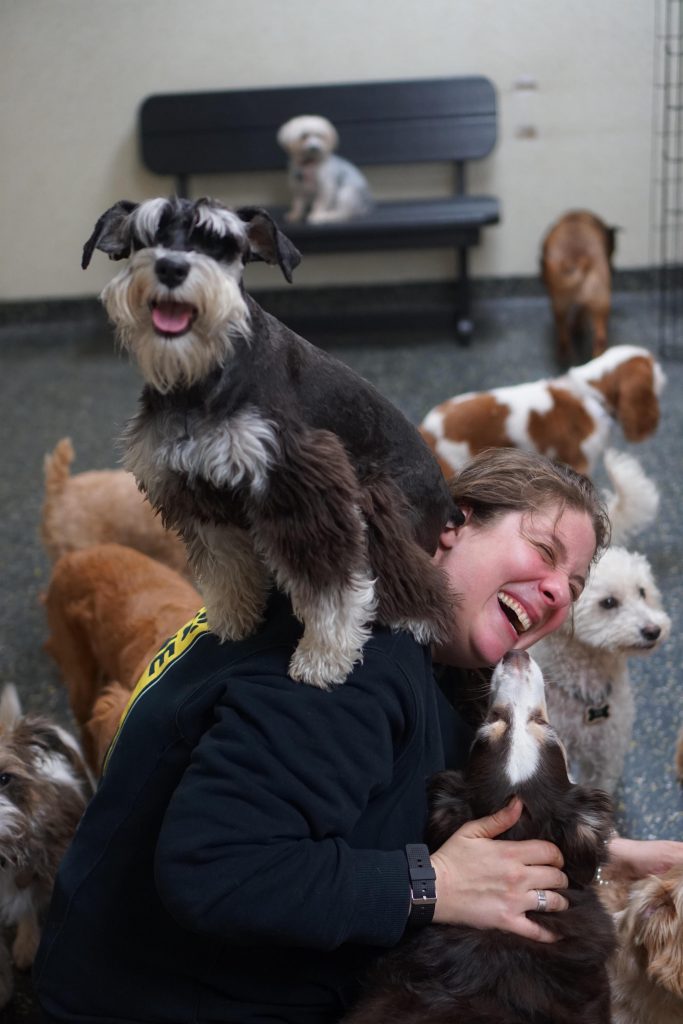