Our employees care for your pets as if they’re their own. They treasure the kisses, the cuddles, and the play times that they share with your pet during the day, before they return to their own furry friends each night. Let’s meet our staff’s pets! 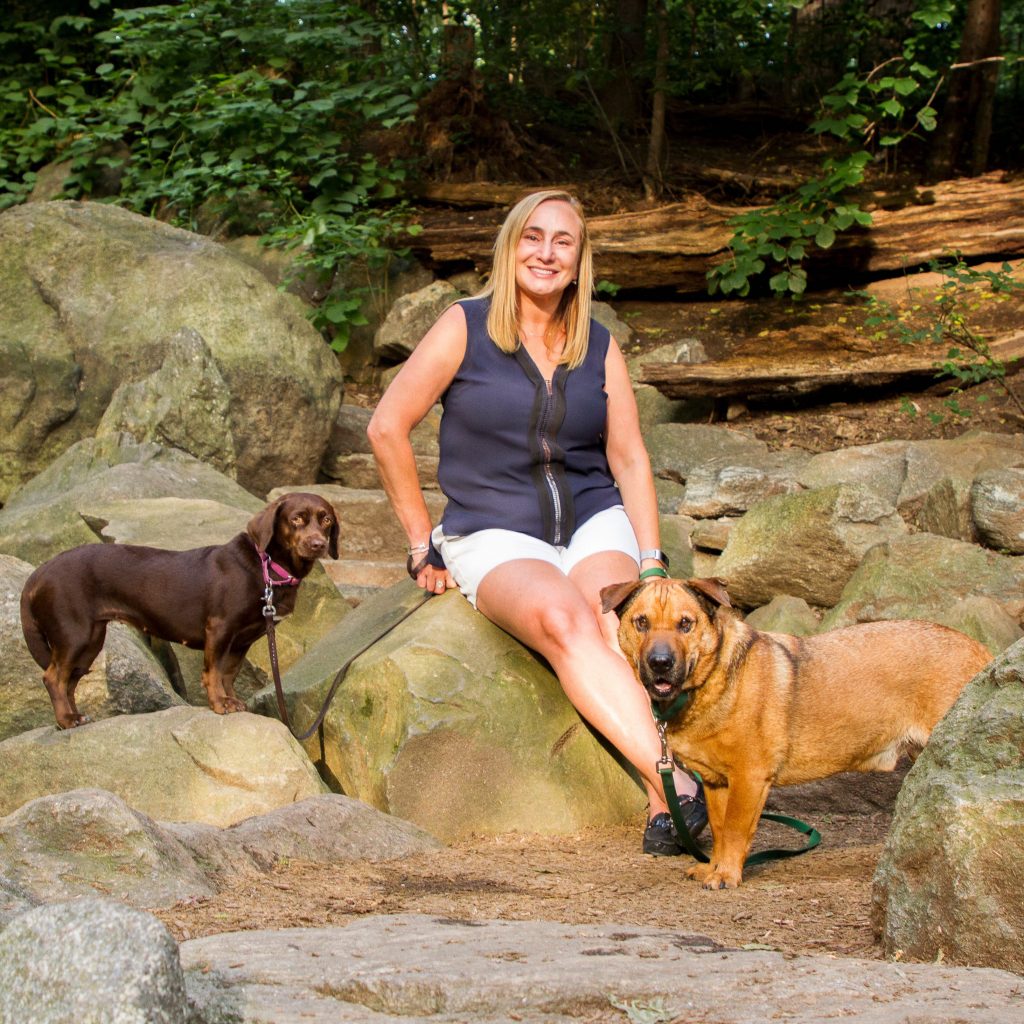 NAMES: Nacho (left) and Bean (right)
FUR CHILDREN OF: Top Dog Tania
Nacho is the King of Camp Canine! He’s a Shar Pei mix who was found living in a parking lot in Puerto Rico – aka a “sato.” He was rescued by Animal Lighthouse Rescue (and his momma is now Chairman of the Board there!) and brought to NYC. Now, he lives a life of luxury as the Mayor of the Upper West Side and has learned to love his pesky sister Bean. Bean was adopted a little over a year ago (also a stray dog rescued by Animal Lighthouse Rescue!) She was found nursing four puppies; now she’s loving New York City, her momma, bully sticks, and bothering Nacho. 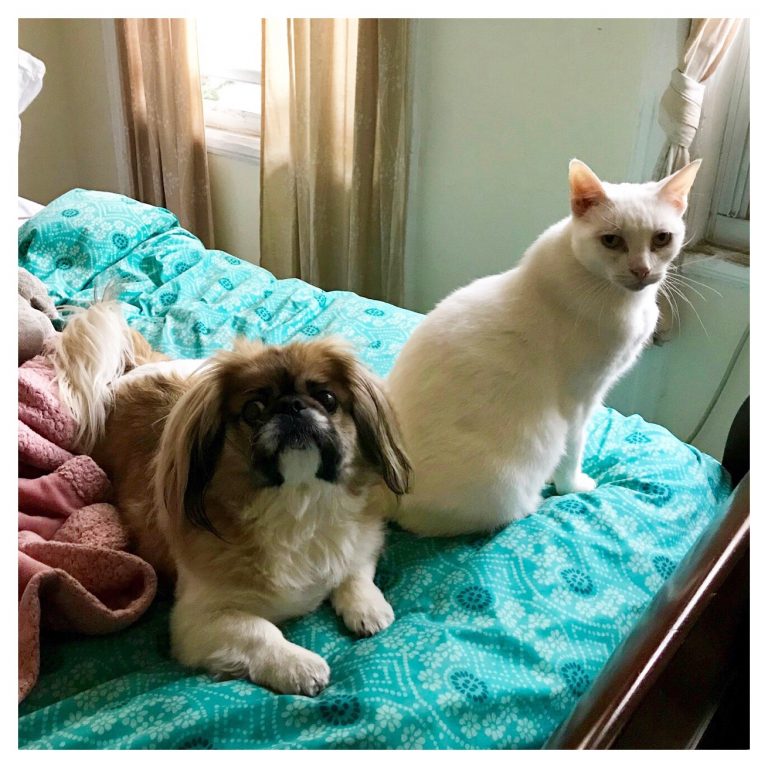 NAMES: Fluffy aka Captain Flufferpants (left) and Maggie aka The Princess Magdalena (right)
FUR CHILDREN OF: General Manager Betsy
Fluffy came to live with his mom when he was 6 years old; he is incredibly strong willed, and he stomps his feet when he’s mad. You can follow Fluffy on instagram at @captainflufferpants. In fact, they discovered his brother (actual litter mate!) on Instagram a few years ago, and they actually got to meet! Maggie is a 15-year-old, all-white Domestic Shorthair. She went to live with Betsy when she was 7 years old, specifically to discourage mice from visiting Betsy’s apartment (her presence was enough discouragement… no mice since the day she arrived!) Maggie went to live with Betsy about 4 months before Fluffy and was not pleased when Fluffy arrived. She now wants to play with him sometimes, but he has not forgotten how rude she was when he first arrived. She barely tolerates being picked up but wants all the attention. She is more like a dog than a cat; she will beg for rotisserie chicken and eats Fluffy’s food. 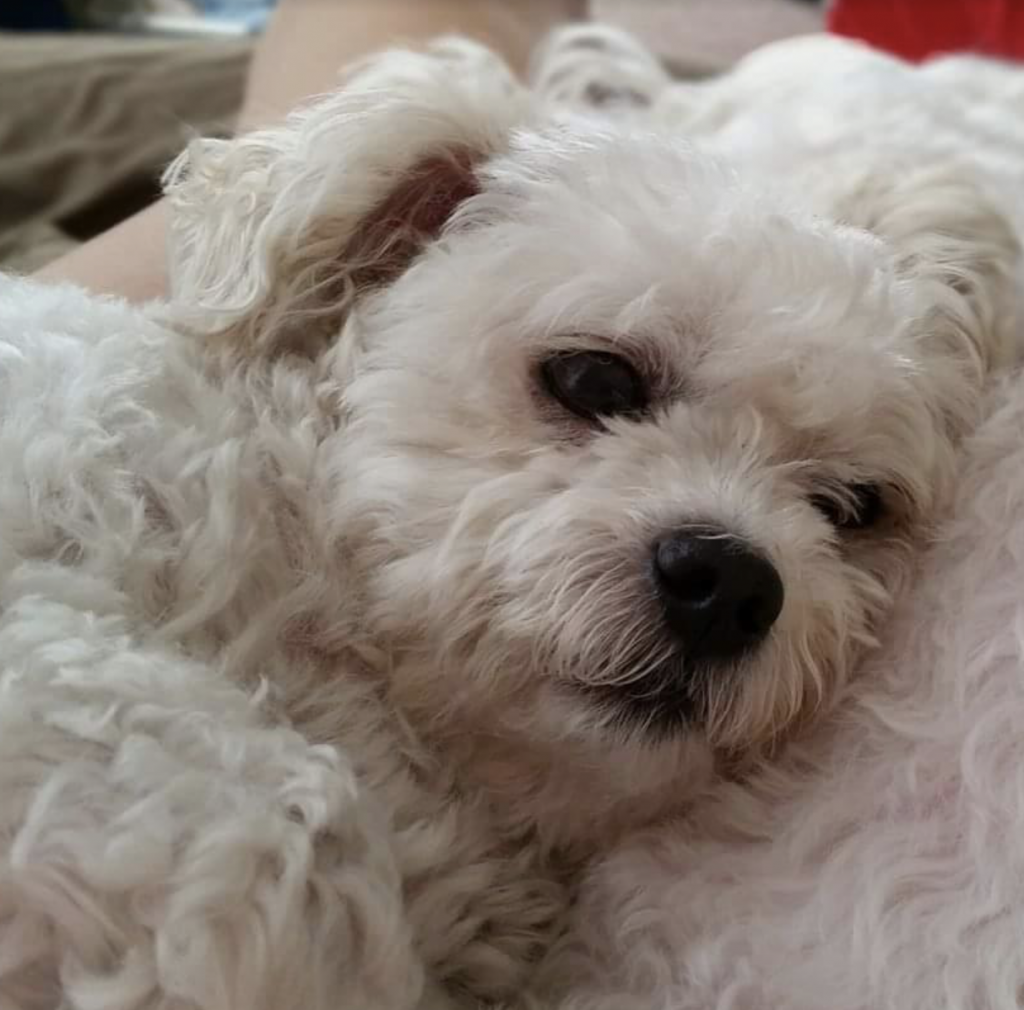 NAMES: Emma
FUR CHILD OF: Counselor Brenda
Emma is an 8-year-old Malti-Poo. She was found tied to the doorknob of someone’s apartment up in the Bronx and she was so skinny you could see her spine. Brenda agreed to foster her while her rescue organization searched for her ‘furever home.’ During their first few days together, an acquaintance took a liking to her and attempted a trial adoption. This lasted less than a week. To say the least, Emma was not on her best behavior during this trial! When she came back to Brenda, she immediately wrapped herself around her leg in a hug. That’s when Brenda knew they’d be inseparable!

NAME: Sergio
FUR CHILD OF: Reservation Specialist & Cat Room Coordinator, Paige
BIO: Sergio was surrendered to Camp Feline, and Paige offered to foster him in her apartment! They fell in love right away, and he became a ‘foster fail.’ He’s 9 years old and the snuggliest cat ever. He requires at least an hour of snuggling in the crook of Paige’s arm nightly. He loves to hide behind furniture and prey on his red fish toy. He runs laps around the house after he uses the litter so that he can be sure to keep the lurking predators off of his scent. He has severe fear of missing-out-syndrome and has to know what’s going on in the apartment at all times. 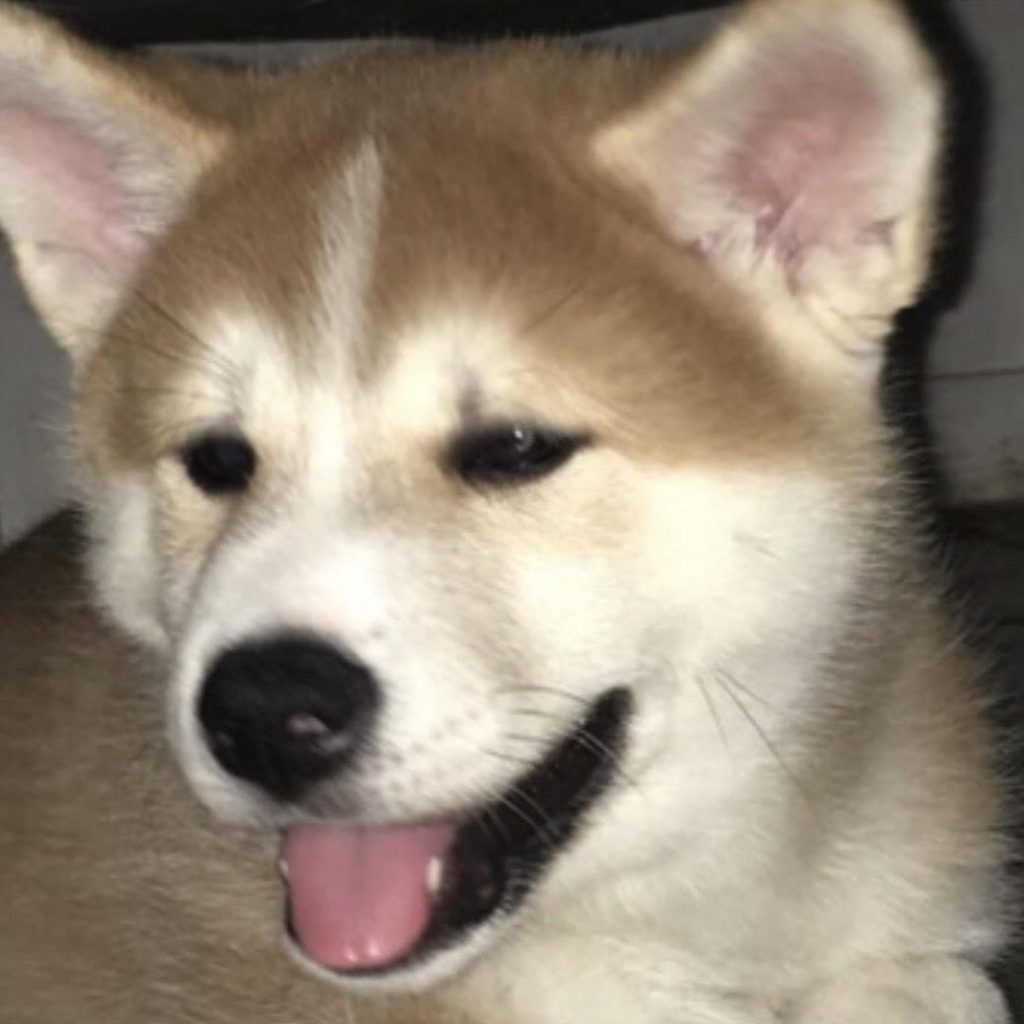 NAME: Makoto
FUR CHILD OF: Counselor Kishia
BIO: Makoto means “sincere” in Japanese; he is a 2-year-old “Shakita” (aka a Shiba Inu-Akita mix.) Kishia trained Makoto and now he is an Emotional Support Animal. He helps out her disabled father! Kishia tells us that Makoto is one of the smartest pets she’s ever had; he even taught himself to bring his water bowl when he’s thirsty! His favorite things to do are playing in the snow and eating it, pouncing on the bed and showing off his tricks. 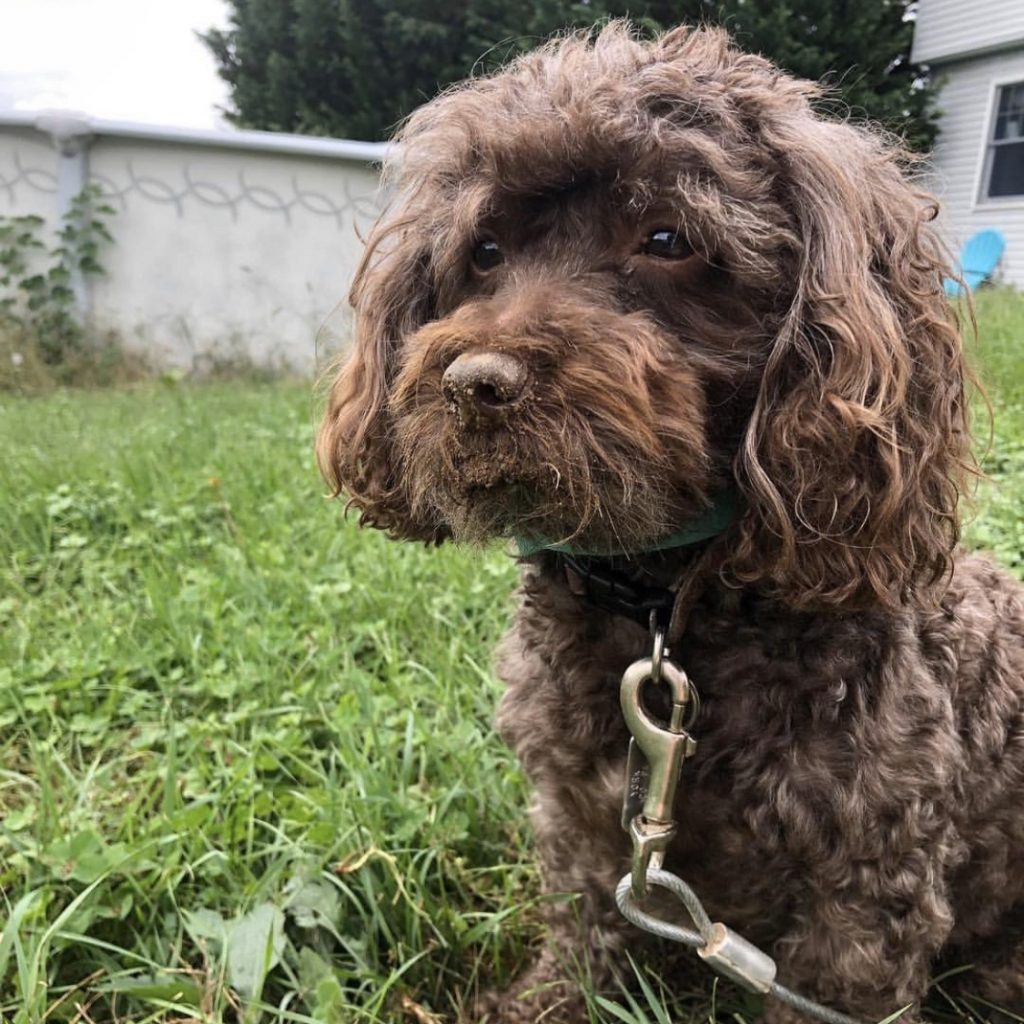 NAME: Benji
FUR CHILD OF: Social Media Manager Amanda
BIO: Benji isn’t exactly Amanda’s – he actually belongs to Amanda’s parents in Pennsylvania, but she considers him like her own. He’s a new(er) addition to the family and, two summers ago, Amanda broke her ankle and had to move back in with her parents during recovery. Benji was like glue – he took his job as her emotional support very seriously. Amanda has met a lot of dogs, but none as quirky as Benji. When he gets outside, he loves to hop and dig. When he wants to play, he snaps his teeth together and makes a whining noise. When he gets in the car, he sticks his head out the window and stares straight down at the street, watching the white lines zoom by. His favorite pastimes are digging in his empty water bowl (in fact, he loves it so much that they purchased him a big plastic bowl solely for digging in!) and occasionally chewing the couch. 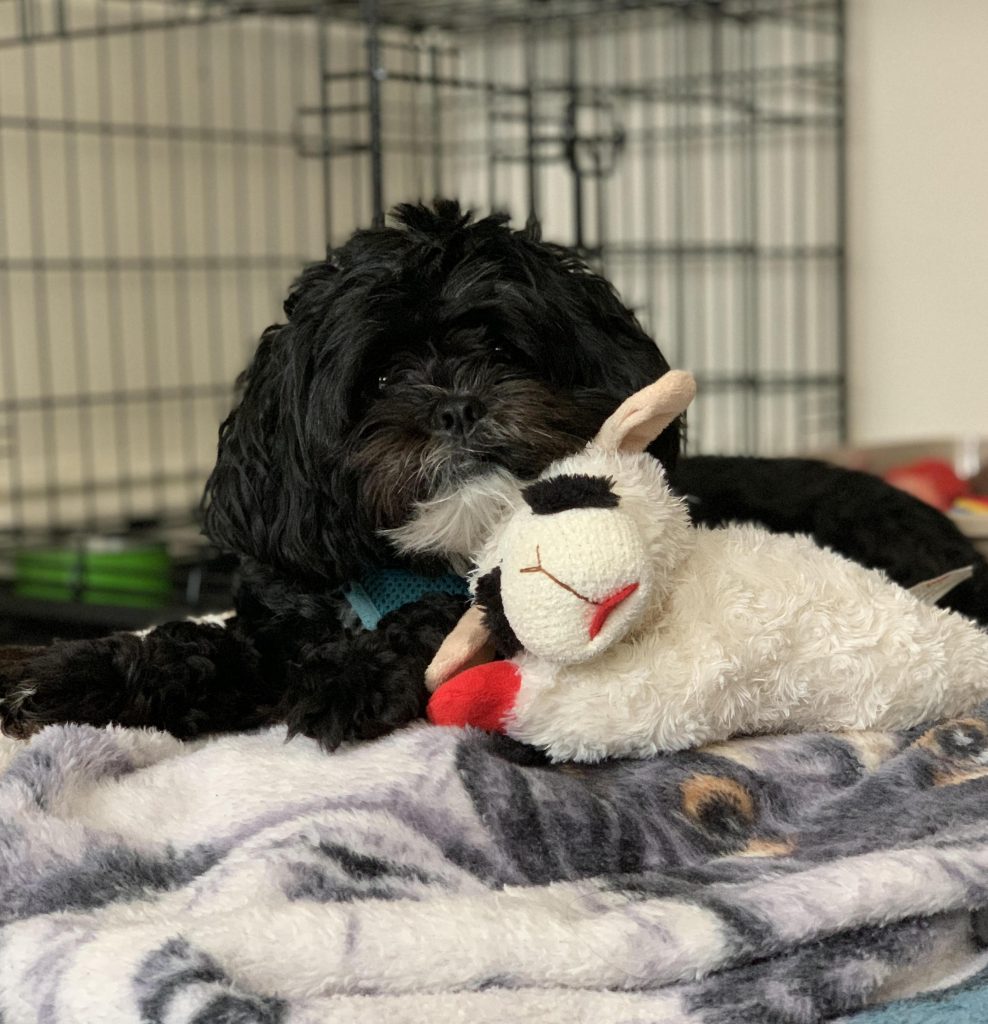 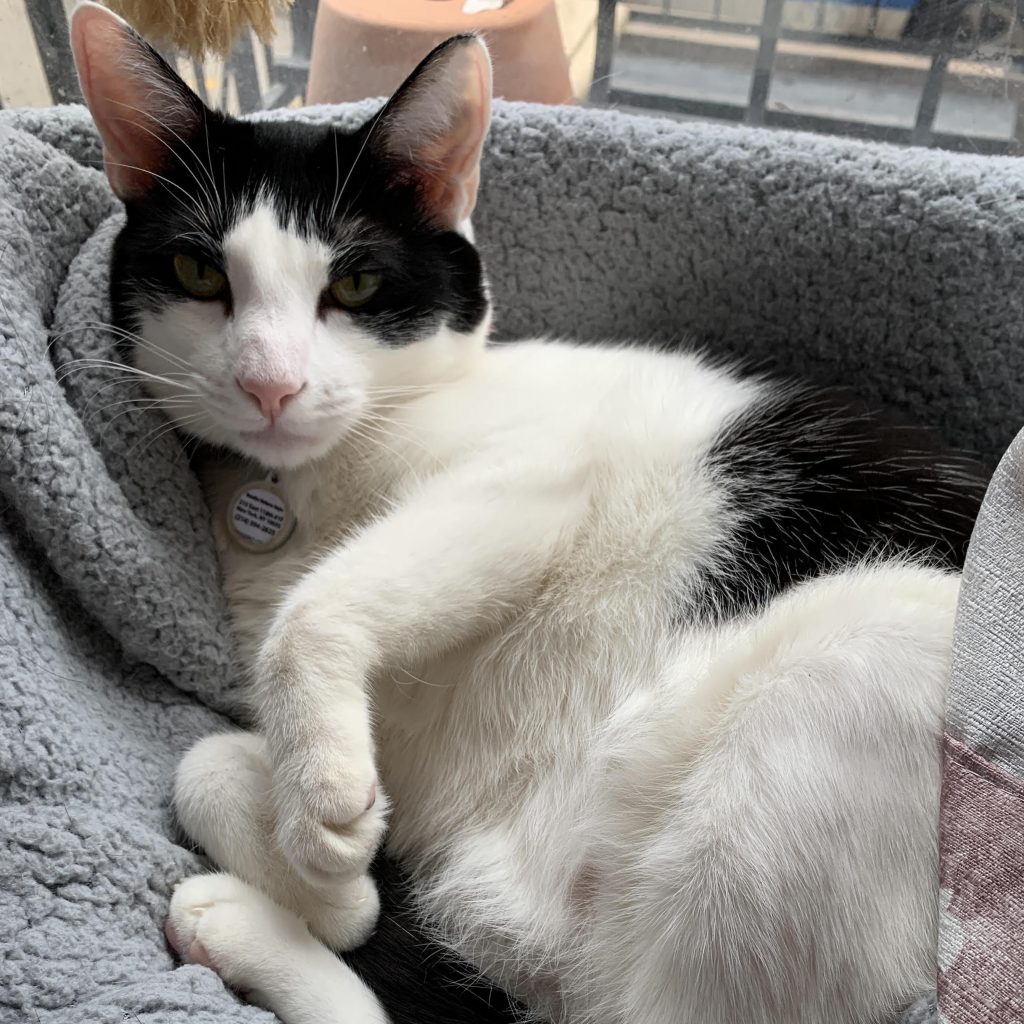 Jessica got Benny in September 2018 at the ASPCA shelter in Manhattan. She and her boyfriend were lonely after just moving to NYC and they wanted the extra love. Benny gave it to them! He’s a 2 year old FIV+ sweet boy; he loves attention and belly rubs from his mommy and adores giving his doggy sister love-bites on her face.

And speaking of that doggy sibling: Delilah is 2-3 years old. Last May, Jessica’s sister reached out to her about a small dog she saw in a Dallas shelter with the big label “AGGRESSIVE” on her crate. Her sister reached out to Jessica because, when she saw her, she just thought she looked scared and though she needed extra love. The staff was very apprehensive and tried to warn her sister that Delilah (who they nicknamed “Cujo”) was just returned again because of her behavior. But Jessica and her sister decided that they were going to take her anyway. When Jessica first met Delilah, she bit her arm. But Jessica laughed it off and dedicated time to get to know her. Soon, they became so attached that Delilah made her way to NYC. They are overcoming her fear aggression together, one day at a time. 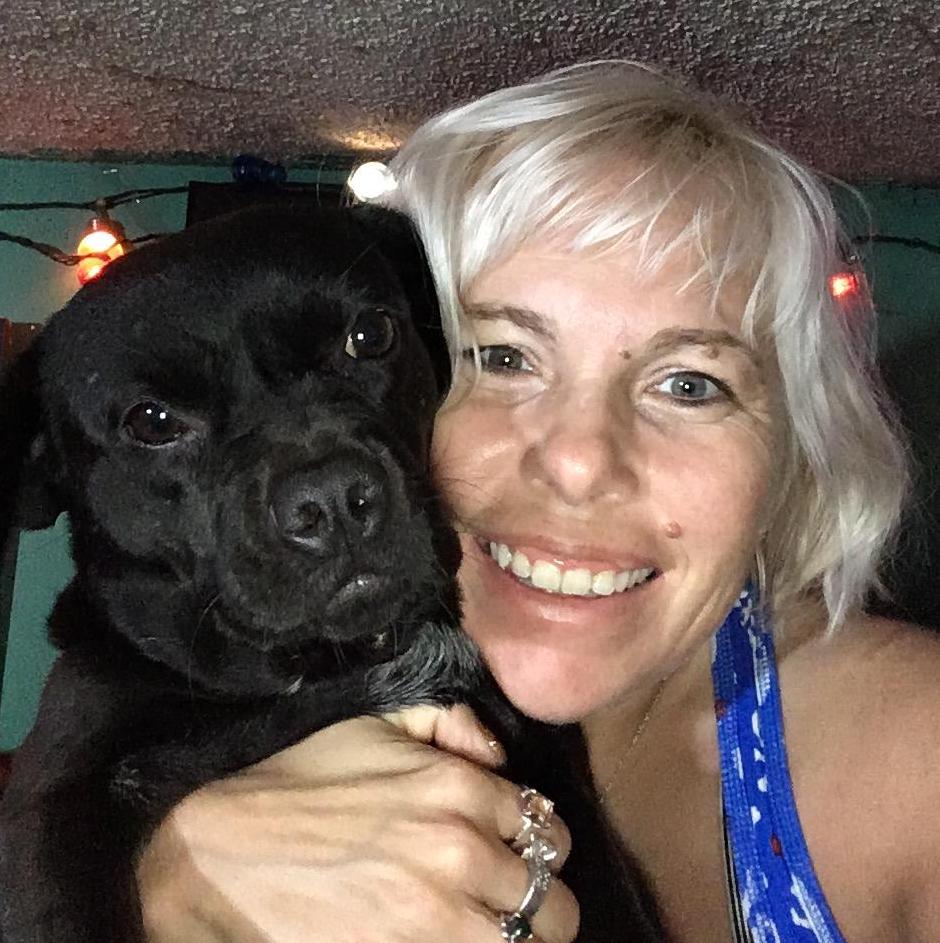 NAME: Tiger Lily
FUR CHILD OF: Counselor Tammy
BIO: Tiger Lily is Tammy’s Pit Bull-Pekingese mix. What an unusual mix! She’s the size of Pekingese and has the personality of a princess. She enjoys interior design and long walks, she’s an accomplished vocalist and especially loves to sing the song of her people at 4 am. She is the youngest of 7, but considers herself an only child. While she may not be a purebred princess, she does believe that – well, if the tiara fits then she’ll wear it. 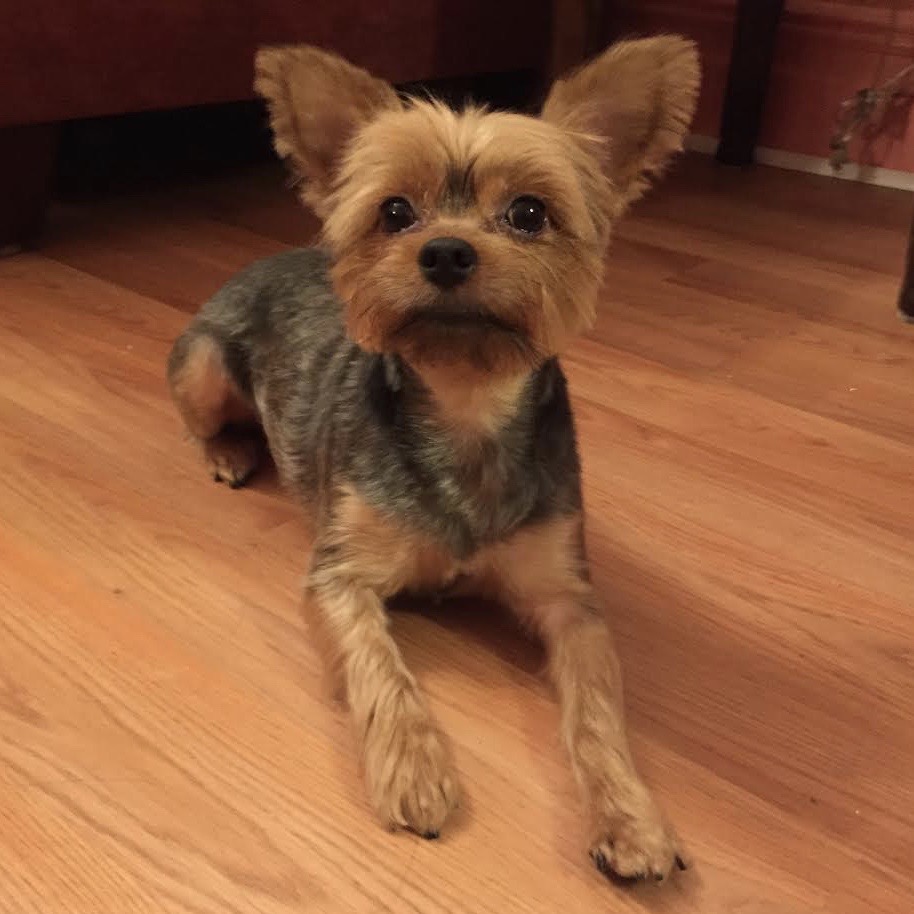 NAME: Romeo
FUR CHILD OF: Counselor Melanie
BIO: Romeo is on the older side (he officially turned 9 on the 19!) but he still acts like a puppy. Melanie has had Romeo since he was 3 months old! He loves to sleep all day, roll around on the ground for fun, play tag with Melanie’s 3-year-old nephew, and hide greenies so that he can snack on them at night. He follows Melanie everywhere she goes. He’ll sit next to her when she’s working out, or wait outside when she’s in the bathroom, and he greets her as if he hasn’t seen her in years (even if I’m gone for a couple of minutes) every time! Melanie knows that she’s so lucky to have this little guy in her life – what a cutie!