Campers Featured in the Pupper West Side!

Our campers are celebrities! Even the local newspaper, the West Side Rag, can’t get enough! Featured in the West Side Rag’s cutest news column, The Pupper West Side, are a number of our campers. Read their features here! These smart and cultured pups cover a range of topics: from their favorite foods and most-frequented Upper West Side locations, and from their greatest loves to their varied backgrounds.

But first, we interviewed Audrey, the Pupper West Side reporter!

How did you come up with this idea?

Like all great ideas, Pupper West Side originates through a selfish desire to pet more dogs. I’ve always been a devoted animal lover, and I grew up in Texas with a variety of pets including a guinea pig, ducks, and a beloved Scottish Terrier named Missy. Living and taking long walks around the Upper West Side, I would always see tons of dogs but wouldn’t feel like I could approach them and pet them. After all, this is New York. One day, I told my husband, Neil, “I need to come up with a legitimate reason to pet dogs so I won’t seem like a lunatic. How can I do that?” And thus, Pupper West Side was born.

Do you have your own Pupper West Sider?

I do, indeed! My dog, Manny, is a 12-year-old Jack Russell terrier mix. He lives with us and serves as the mascot and muse for all things Pupper West Side. He’s often snuggled up next to me on the couch while I write the weekly columns. You’ll be able to read about his favorite neighborhood haunts in a forthcoming Pupper West Side profile. 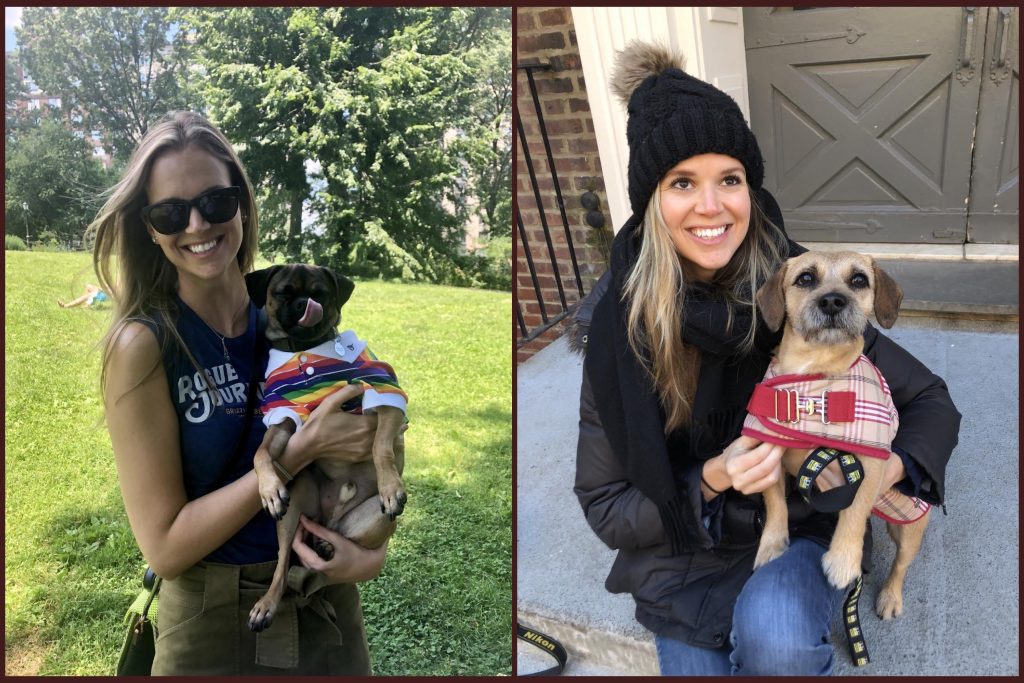 What has been the best part of writing the weekly column?

Well, first I would I have to say that the encouraging and warm response to Pupper West Side has been really meaningful to me. I came up with the idea but worried that others might find it strange or ridiculous. Quite the opposite! Instead, after the first column came out in early 2019 featuring Enzo, the West Side Rag received an overwhelming response from readers who were eager to have their pups featured. I was so delighted to see how many people responded to this idea and welcomed the opportunity to intersperse our daily neighborhood news with something lighthearted, informative, and cheerful. Based on that response and the many inquiries I’ve received since then, I’ve had the opportunity to meet so many neighbors and friends. I’ve learned about lots of other dog- and pet-centric small businesses based on the Upper West Side and around NYC including Amuse Pooch treats, Amanda Gagnon Dog Training, The Pupper Cup, and of course, Camp Canine, among others. It’s been such a pleasure to be able to meet and fawn over so many diverse pups.

How do you choose the featured pups?

I don’t, they choose me! Initially, I sent out a few messages to local dog owners to help get the column started, but after the first interview, we received lots of requests via email to the West Side Rag. I have to also give a special thanks to Harry and Enzo, my first interviewees. Harry was so good natured and easygoing about the interview. He provided fantastic responses on Enzo’s behalf. But, back to your question, I approach interviews democratically and interview everyone who sends me an email. It’s an exclusive club of many! Large and small, young and old, purebred and mixed breed, rescue or not, able-bodied or handicapped, all dogs are welcome.

“Not crazy about veggie- or kale-based dog treats, even though those are all the rage these days. Packages always say ‘cranberry and kale, healthy for dogs!’ Blech.” – Enzo 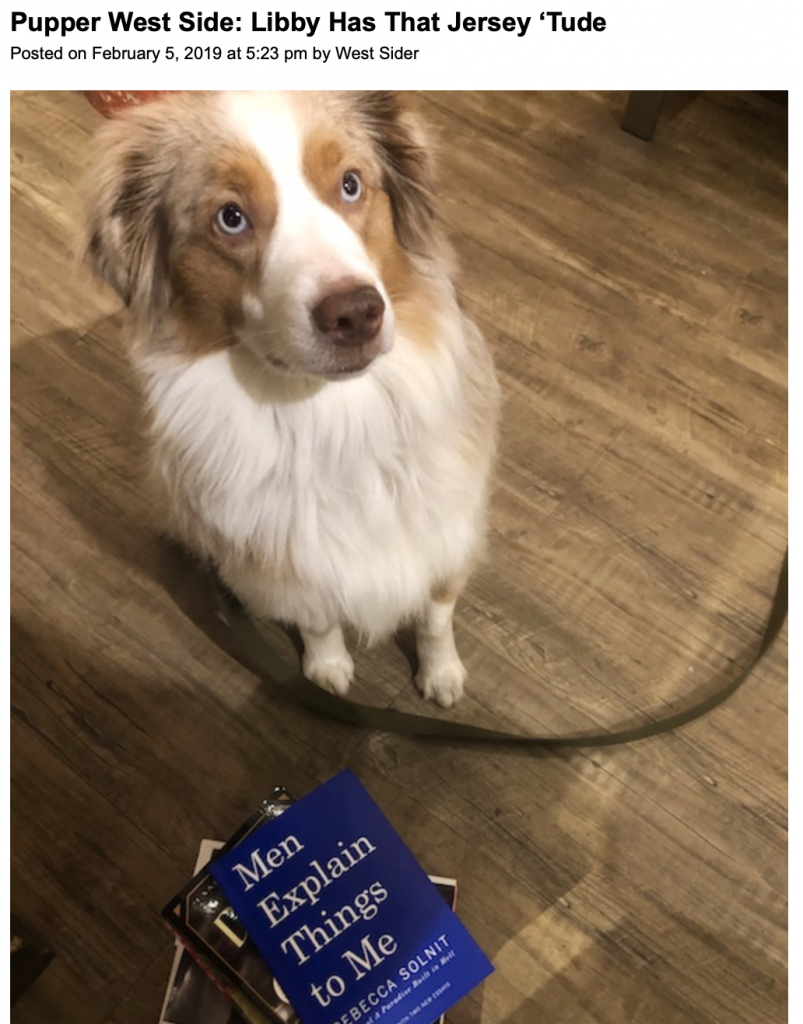 “I’m originally from New Jersey and it shows in my attitude. Now I’m a ride-or-die Upper West Sider and I love city life.” – Libby 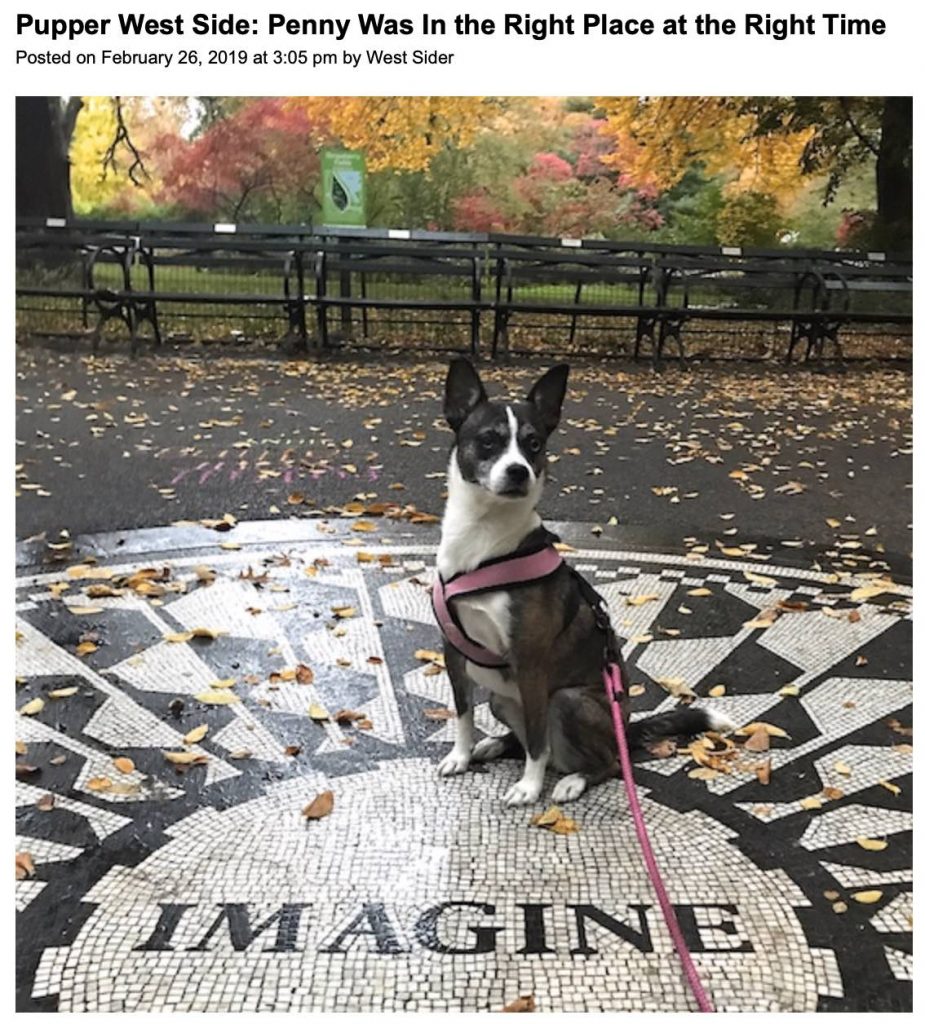 “Mom adopted me from Animal Lighthouse Rescue in June 2018. At the time, I was living with a wonderful foster parent on the Upper West Side and Mom ran into us during a neighborhood walk. Luckily, I was wearing my ‘adopt me’ foster dog vest and it turned out to be perfect timing for us both.” – Penny 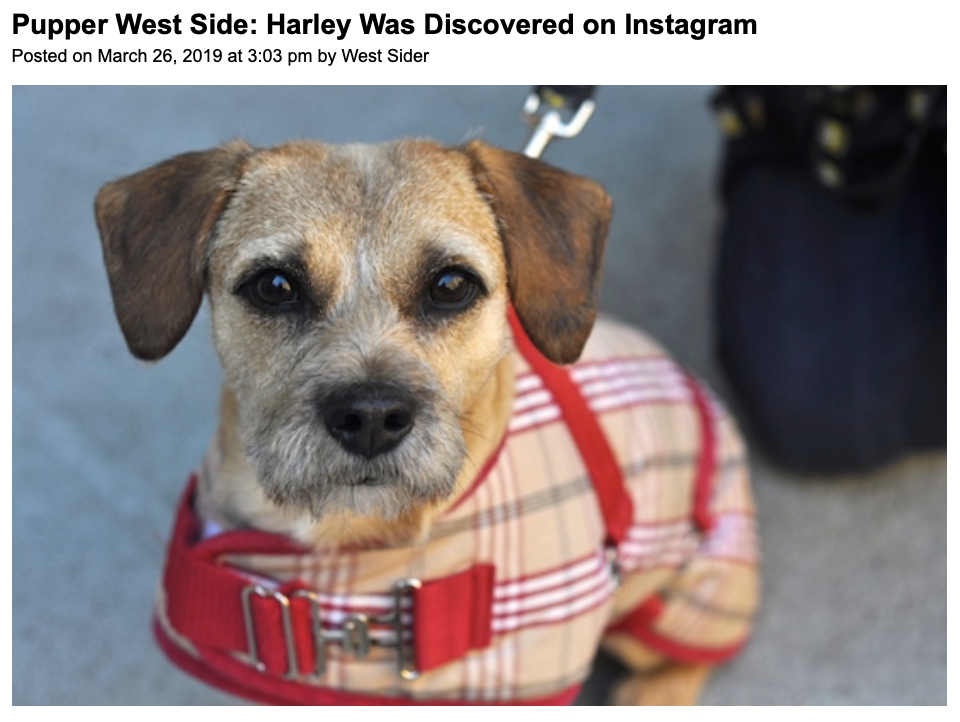 “Mom saw my photo while scrolling through Instagram and she fell in love. Paws up for the Instagram dog-rescue community!” – Harley 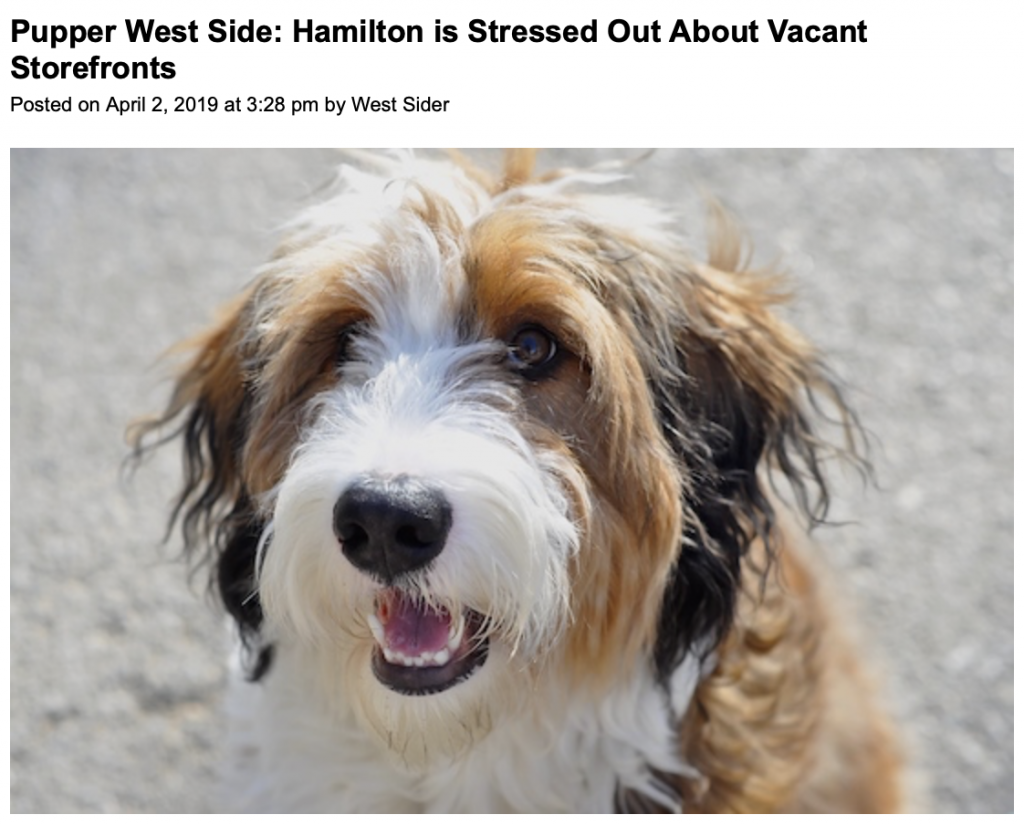 “I’m worried that one day Mom, Dad, and I will have to leave the neighborhood! What a scary thought! Who wouldn’t love living here? I look forward to doing my part to ensure that all of our current businesses continue to get the pup patronage they need to grow and thrive.” – Hamilton 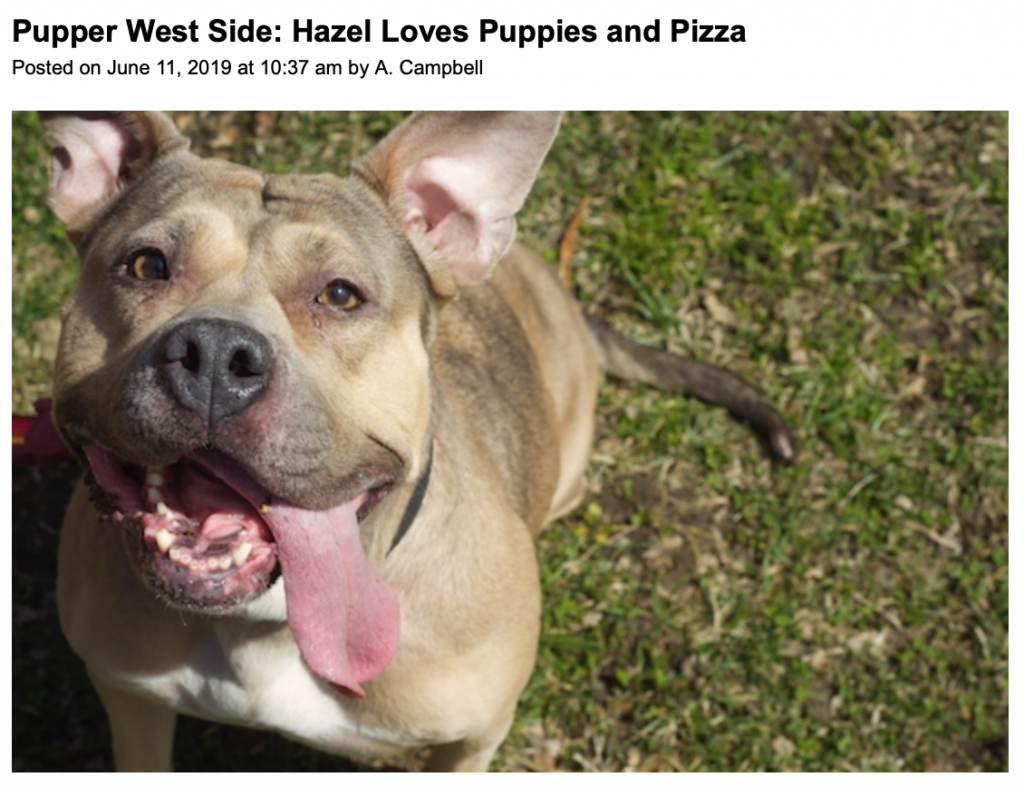 “I love puppies! Who doesn’t love puppies? And sticks. And pizza! Sometimes I’ll start closely trailing people walking along with their street slice. You never know when the slice might accidentally just slip off their paper plate, right?! Nom, nom, nom.” – Hazel 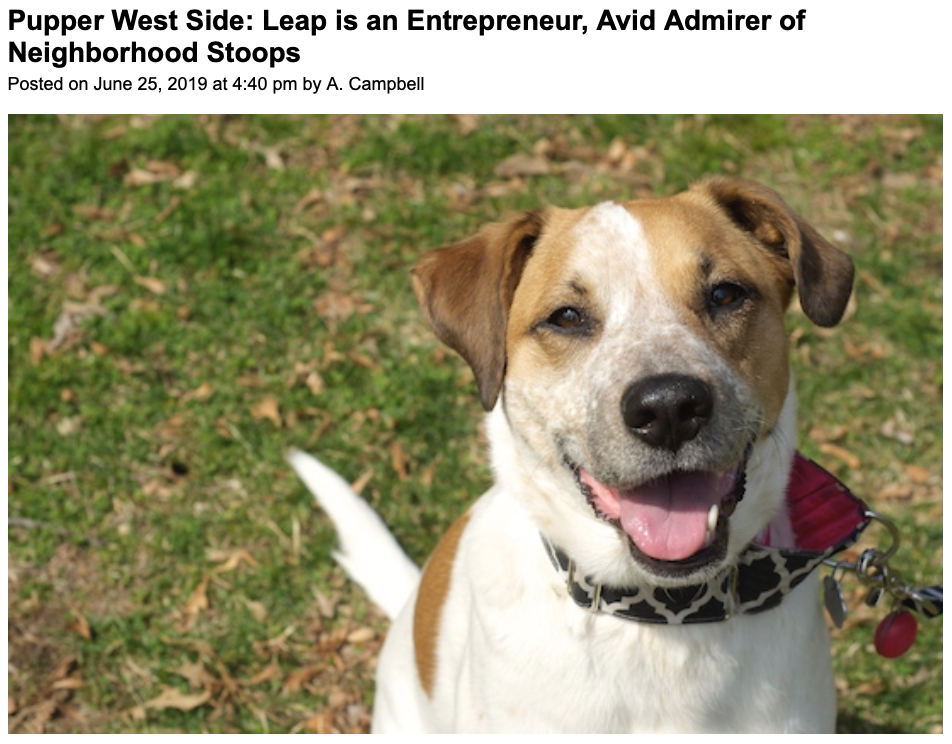 “Mom went to her boss and said, ‘I quit – I’m going to rescue a dog!’ Around that time, my dog mom, my litter mates, and I had been rescued from a kill shelter in Virginia by Homeward Bound. Mom drove to Pennsylvania and came home with me that day. Soon, I became the inspiration and brand ambassador for Mom’s new business!” – Leap 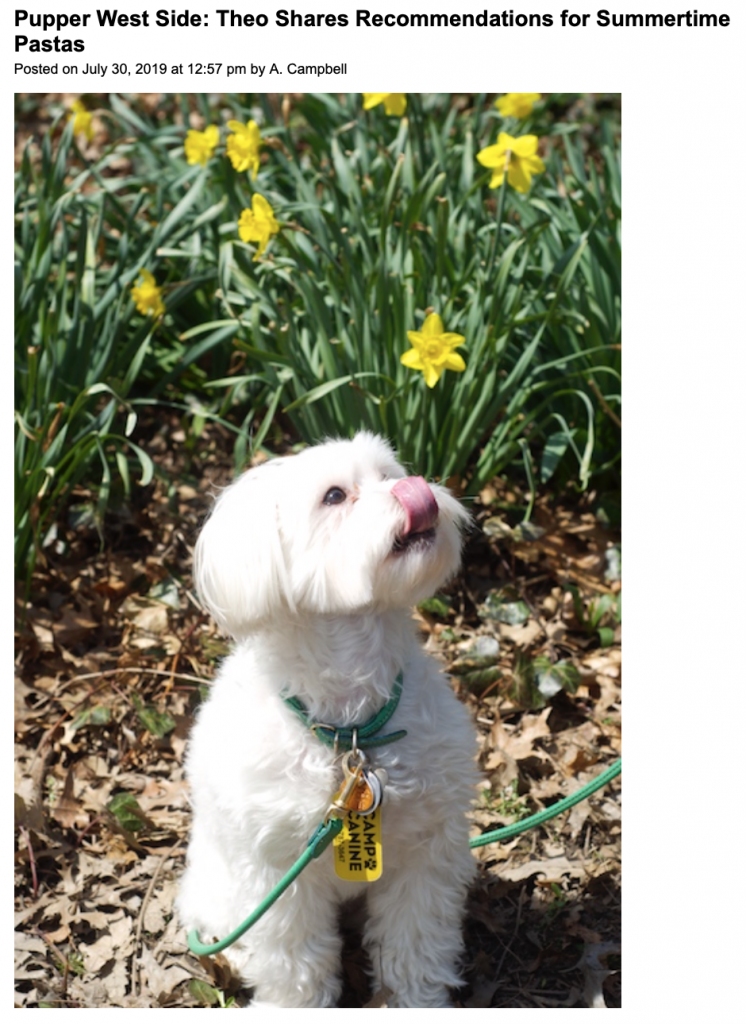 “I love pasta – all kinds. A meaty bolognese hits the spot on a cold day. You can never go wrong with cacio e pepe, and I would strongly recommend picking up a high quality Grana Padano and Pecorino cheese from a neighborhood spot like Salumeria Rosi on Amsterdam and W 73rd.” – Theo